I have mostly finished this research trip (which was supposed to be to South Korea) with a series of excellent interviews that really helped fill in the holes and provide some very valuable perspectives.  In previous visits, I had interviewed military officers, folks in the Ministry of Defense, heaps of former defense ministers and experts.  This time, the focus was on clarifying stuff about parties, so we talked with a few members of the Diet from the leading parties--LDP and Komeito--and a senior government official. Heaps of perspective sauce was dished out.  I have a couple of lunch meetings next week, but those are exchanges of views more than research interviews.  So, nearly done. 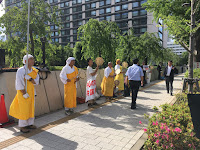 Oh, and just like in Brazil, I ran into some protests.  These were focused on terrorism laws and arguments that Prime Minister Abe is a dictator. 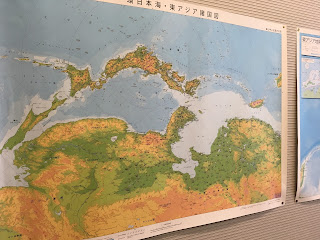 It is easy to find this kind of map in a government office in Japan and hard to find online.  What I like about it is that it gives you a Chinese view of the Pacific--that China is contained or constrained by Japan/Taiwan/islands in between.  The South China Sea is the same--that for Chinese ships to get out to the open seas, they have to pass through narrow straits.  Anyhow, I was strangely happy to see this pic.


I had a free day in the middle of the week so I went to Mount Takao and hiked up and saw some shrines and some monkeys: 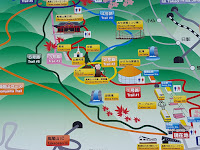 There are apparently wild monkeys and flying squirrels and other wildlife, but the only animals I saw was in a monkey enclosure.  This is a mom with a very small baby hanging underneath--two weeks old.  There were several sets of moms and babies, teens and older ones.  So, yeah, I saw more monkeys in Japan than Brazil (1). 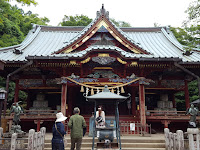 So, what does one do when done with research?  Look at a big Buddha and hydreangas! The pictures are from the city or town of Kamakura, about an hour south of Tokyo. 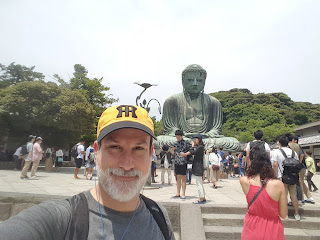 I have completed the trifecta: I watched Sumo and Kabuki in the fall and now ...  And yes, I sing even worse than I remembered.

Posted by Steve Saideman at 6:51 AM