Given that I have been advocating that Canada play a significant role in the "persistent presence" mission in the Balitcs for quite some time (happy anniversary!), those who follow the Semi-Spew may have been surprised that I have not written about the arrival of the Canadians in Latvia over the past week.

I have been kind of busy with research and presentation travel, but I am glad not just that the Canadians came through but also that there was plenty of coverage. See the various reports by Mercedes Stephenson, for example.  Of course, this mission will become boring and not-news pretty quickly, which is all to the good. That is, the best news from a deterrence effort is no news--that it is not being tested. 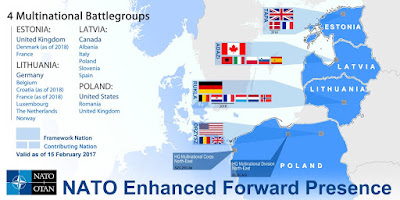 Anyhow, for me, my interest has shifted from if to when to how.  I yammered last spring that this is something Canada should do and then kept asking when it would start, to the point that Canada's top general considered my "why are we late?" question as "pejorative."

For me, the researcher, the fun begins now--I hope to go to Latvia and maybe the other Baltic countries next spring to ask questions about how it is working.  Canada is now working with several countries with which it has almost no prior experience--Italy, Spain, Poland, Croatia, Slovenia and Albania.  Not to mention Latvia itself.  I am curious as to how the stuff we've studied before plays out in a deterrence mission.

Of course, the caveats are not going to matter as much here in Latvia as in Afghanistan as varied performance in combat will matter far less.  Why? Because, frankly, the troops in the Baltics are not expected to win but to die if the Russians invaded, providing a tripwire that more or less automatically brings in the entire alliance.  The point is to deter, not to fight.  Still, different rules and different organizational cultures may matter quite a bit for dealing with threats below the threshold of invasion/World War III.

Oh, and the joy of NATO is this new mission will mean more acronyms, such as EFP!  And fudging: persistent presence not permanent.  Still, I am glad the mission is underway, that any window of opportunity/vulnerability has been closed (thanks Obama!).  It is good for European stability, it is good for Canadian foreign policy, and it is good for my research. Win-win-win.

Posted by Steve Saideman at 8:12 AM