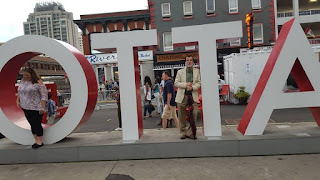 This week marks the fifth anniversary of the move to Ottawa and to Carleton.  It has worked out better than we imagined.  To be sure, this one had an advantage over all the other moves--it was the first time we moved to a place where we knew people and had many friends.  Last night's party for Roland and Katie Paris reminded me of that, as Roland was one of the friends who was so very enthused for our move and welcomed us.

So, what do I love about Ottawa and Carleton after five years?
I am sure I am forgetting stuff, but the key is that we are very happy.  The five years have flown by as they have been full of interesting experiences, much fun with friends, excellent beer, and heaps of frisbee.  So, thanks, Ottawanians for making me and mine so welcome.