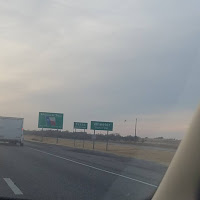 Hump day of the trip (the middle day of a five day drive) passed quickly as the weather was good, the cows were many, and the signs were mostly boring.  We must have seen a couple thousand cows of various types.


The wackiest sign was unintentionally so, unlike the previous day's: The Tommy Franks Leadership Institute and Museum.  I was not expecting it so we didn't get a picture of it.  Given that Franks was known as the dumbest m-f-er in DC along with Doug Feith (their competition was intense and bitter),  and that Franks seemed to be a kiss up, kick down kind of guy, that he has a leadership institute seemed to perfect.... perfectly amusing. 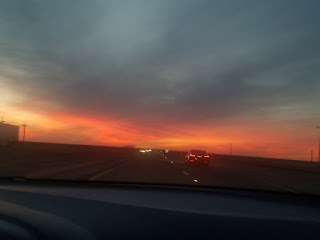 The big change in the driving started in Oklahoma and continued in Texas---the prominent traffic signs were about keeping the left lane open for super fast driving.  Weeee!  Yes, we made very good time.  The sunset went on forever since the land was so flat: 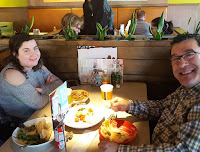 We saw my brother in Tulsa, as he has been living there the past few years.  Indeed, the day was very much a family day as we finished the drive in Amarillo, where Jessica's maternal grandfather was from.  Oh, and Jessica is .... a Texas, born in Lubbock.  However, we did not engage in a nostalgia trip to that town because it is about 1.5-2 hours off of the past west and on the way to nowhere.  It would have been fun to go back and see the place, but the only deviation from our driving will be on the last day--to the Grand Canyon.


Our theme song could have been this, but instead we went with:

Posted by Steve Saideman at 6:42 AM