Addressing the Bad Arguments About COVID

This is probably a fruitless exercise since this really addresses the incurably ignorant more than the rest of us, but I thought I would address a few of the arguments aimed at diminishing the seriousness of the pandemic. 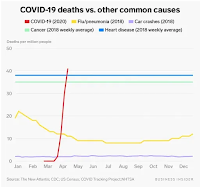 Of course, the reality is that much of this "opposition" to stay-at-home stuff is performative--funded by Betty DeVos and others seeking to undermine Democrats, seeking to open markets up even as it risks the lives of others.  Polls show that much more Americans support stay-at-home rules than those who are opposed, despite how much the media is exaggerating the opposition.

So, why argue against these specious arguments?  Mostly because we have plenty of time to rail against the actors of Bad Faith and the party of Bad Faith.  And I can't help myself.
Posted by Steve Saideman at 10:33 AM

If we can avoid the losses of millions of lives, how about we try?

Is that what's going on, though? Or are we just spreading the deaths over a longer period of time so that the health system doesn't get overwhelmed initially? Do the millions of lives only matter if its from a coronavirus? What happens when the next influenza epidemic hits? Are those lives going to be worth less because it's just the flu and not a coronavirus?

There will be many fewer overall deaths if we spread out infections over a longer period of time. Time is on our side. Time to get test kits in place, time to get ppe produced for health care professionals and first responders, time to get medical grade masks and hand sanitizer available for all, time for scientists to work out treatments and a vaccine.

If we stretch it out so that we don't collapse the medical system, fewer people will die.

Again, all forms of death are bad, and it would be great if we could eliminate them all, but COVID is distinct from the flu--it infects more people quickly, it has a higher death rate (even if the numbers come down, the flu tends not to kill 40 Americans in a month), and it is far more likely to cause the medical system to collapse. So, we do more to fight it.

I am not quite as willing as the "hey, it is just like the flu) crowd to write off the lives of tens/hundreds of thousands.

So I see the first problem you think that the "flu" kills only 40 Americans in a month when the CDC's number is in excess of 100 a day and that is for endemic influenza not epidemic influenza. Do you understand the difference?

It is possible that by flattening the curve the health system might save some that would otherwise succumb due to lack of treatment however that is not certain at this point. Do yo know that 50% of patients taken of a ventilator are dead within 6 months(historically)?

The Italian numbers suggest that 50% of mortalities occurred in patients with 3 comorbidities. The NHS in the UK estimated that over 2/3 of their SARS COV-2 fatalities would have died this year statistically. The last numbers I saw have Ontario ICU's over 70% empty.

While we seem to be getting a handle on the epidemic in Canada, if enough people are not exposed we will remain at risk to experience this again. Better oversight of retirement homes, an earlier response/border closure, not throwing out our emergency supplies because of "expiration" dates and storage fees and perhaps Dr. Tam following her own report recommendations from SARS COV-1 instead of whatever she is doing could perhaps have put us in the order of Australia