Quarantine, Week 4: A Month of Staying at Home

Tis the week of confusion, I guess.  Time is going by quickly--hey, it has been a month of isolation--and slowly.... it has been a long, long week in some ways. 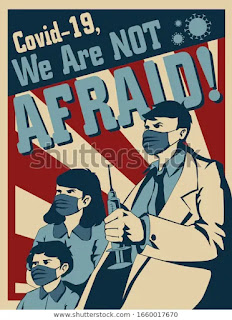 We are hearing about penalties  for being in parks while we also hear talk of re-opening.  We haven't even gotten the physical distancing stuff right, yet there is much pressure to undo it.  I get it--that the economy is suffering greatly, but if we don't do the smart stuff now, more people will die.


I am less confused by the folks who argue that this is not that big of a deal--just the flu.  These people are from the Party of Bad Faith.  They don't really believe these arguments or they must be blissfully unaware of the doctors and nurses that are dying, of the ERs and hospitals that are jammed, of the bodies literally piling up all over NYC.  I am not sure these folks are worth engaging since they don't really care about the facts, and they don't seem to care about people needlessly dying. 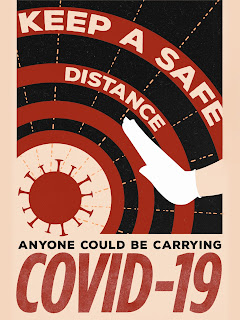 Mask?  No Mask?  CDC says yes, WHO says no.  I have taken to wearing bandannas or turtles (circular fleece scarves) when I go out.  Ultimate has me well prepared since I have a pile of 30 or bandannas.  Mrs. Spew and Kid/Teen Spew gave me bandannas rather than ties for Father's Day.  These bandannas were handy to keep the sweat out of my face, and then they developed a second purpose as I got older--sunburn prevention.  Oy.  I tend to take two (since I have so many), and place one on top of the other and then fold into a triangle and wear bank-robber-style.  I tuck the bottom into my shirt and away I go.

Of course, I don't go out often.  I shopped early in the week (trying to keep the larder full and fresh but also trying to space out the trips so we do it less often).  I gave blood on Friday.  They were much better organized, had plastic shields between the person taking my hemog and asking questions and me.  I only realized afterward that they are now skipping the blood pressure step.  I got my usual packets of oreos and box of apple juice on the way out.  They have had a lot more folks not only interested in giving blood but also not no-showing.  A combo of more free time and increased sense of social obligation? 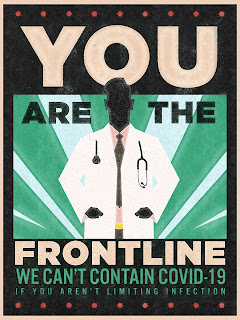 Of course, the sadness is unavoidable.  A second cousin I barely know lost her husband.  I couldn't attend the virtual shiva as it was the same time as my PhD seminar.  Besides watching the helpers, we can take solace in seeing friends and family recovering.  My niece not only recovered but got un-furloughed.  A good friend demonstrated that she beat COVID by showing a pic on facebook of her favorite cocktail.  Most people do recover from this virus, but it is taking such a toll.

I did manage to have a good (slightly productive) week work-wise. I graded the last of the student presentations.  The last few weeks of the civ-mil class was supposed to have students present their research projects.  Instead of doing it in class, I had them post narrated powerpoint files, and then other students could comment on their presentations via the courseware discussion board.  It worked out quite well, given the circumstances.  In person is still better for both the presentation and the feedback, but all of the students engaged with at least some of the presentations. 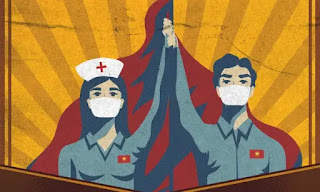 The highlight of the week was interviewing three former US military officers about their involvement in the Iraq war.  Ora Szekely, a former student, and I are reviving a paper that seeks to see bureaucratic politics differently, and we are comparing the pre-war planning for the Iraq army and what actually happened--the disbanding of the Iraqi army a.k.a. the dumbest decision in US foreign policy.  We are getting good stuff and good tips of who to interview next.  Not everything we are hearing is useful, but it is all fascinating.  We need to get more on the civilian side, and we should be getting that in the weeks ahead.  The other highlight is that we got one of the grants for the CDSN Summer Institute.  We still have to figure out whether it will happen or not as we don't know what the restrictions will be in August, but this funding agency already is letting folks extend a year.

Mrs. Spew and I have made heaps of progress on Netflix with the latest a short series--The Letter to the King--teen knights amid much magic and fantasy.  Not bad.  I haven't made much progress in any of the video games I got--I tend to be bad at them.  My goal this weekend is to finish my US and Canadian taxes.  I know we know have months and months to do them, but getting them done in mid April is part of my routine.  A  new routine?  Looking for and posting COVID War posters.

Anyhow, I hope you and yours are healthy and finding ways to pass the time.