I basically got challenged and trapped by Seva:


What did these old shows teach me that is relevant for contemporary social science and especially the stuff that I do.

Hogan's Heroes was my fave of this bunch and the only one for which I have all the DVDs.  Yeah, really.  Perhaps because it is so chock full of principal-agent problems.  The most obvious example is:

Sergeant Schultz knew nothing, heard nothing, and said nothing to his superiors about what he observed in Hogan's barracks.  Schultz, of course, was delegated the responsibility of overseeing the prisoners, but he didn't tell his principal, Colonel Klink, what he observed much of the time.  Holy principal-agent problem, Batman.  Oh wait, we will get to Batman and Robin later.  Schultz, of course, was not the only agent that shirked.  Klink lied to his boss, General Burkhalter to avoid the penalties.  Burkhalter himself proved to be a lousy agent at times, feuding with the Gestapo, who were a key oversight arm of the regime.  Hogan was able to even put Major Hochstetter of the Gestapo into awkward spots that the Major would not always report accurately to his superiors.  Part of this is that the incentives were so tilted towards the negative--being sent to the Russian front--that it dominated the positive ones--promotion, better access to booze, etc.  It really showed that relying on fear leads to agents shirking.
To be fair, Hogan had his own problems with his agents.  They sometimes did stupid stuff, especially Sgt. Carter.  But that was less about incentives and more about not always being able to pick the agents one has.  LeBeau and Newkirk proved to be more reliable except when women were involved.  Kinchloe was the most reliable agent, and was only tempted to stray when, yes, women were involved.  Hogan himself was not entirely reliable, as he sometimes defied his London principals when his people were at risk.
And of the women in the series?  Mostly, Klink's secretaries were lousy agents, willing to help Hogan whenever he asked.  He provides incentives to them to shirk that were apparently not available to Klink.
Like any comedy, many of the plots relied on some people having information that others did not.  From that not only does comedy ensue but so do principal-agent problems. 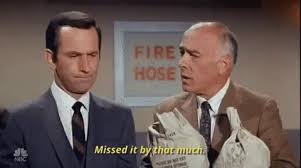 Get Smart showed well what happens when you hire an agent with a mixed set of skills.  Maxwell Smart was most limited.  Luckily, he had a partner on most efforts that improved his performance, Agent 99 aka Steve's first crush.  Hiring a team of agents can make things work better as each helps emphasize the strengths of the other while helping to offset the weaknesses.  Oh, and the bad guys from KAOS had heaps of P-A problems that partnering did not seem to fix.

Batman teaches us much about the scientific method.  Remember, Batman was known as the World's Greatest Detective.  He not only showed impressive powers of deduction, but he was an early user of analytics--note the computers in the batcave.  Moreover, Batman was eager to train his protege, in a professor-graduate student kind of relationship with Robin.  While I don't use the Socratic Method in my teaching, Batman taught me pretty much everything I know about it.  I would have to say that Batman was the greatest methodologist of the DC universe.

Gilligan's Island was a pretty terrific show for educating folks about class politics and gender dynamics.  Notice how Mr. and Mrs. Howell did very little of the work, had everyone else act essentially as servants, and both seemed largely oblivious.  Indeed, the show went to great lengths to show the contempt for the well off--was this show secretly Marxist?  Then you have the bosses (the Skipper) regularly abusing the proletariat (Gilligan).  Sure, he made nice to Gilligan, but that was mostly to feed Gilligan's false consciousness that this hierarchy was normal and legitimate.  I am sure feminists have had a field day with this show, so I will just note that the men seemed to insist on a strict division of labor with the men doing the "highly valued" work and with the women doing the housework (Mary Ann), the entertainment (Ginger), and the management of the old man (Mrs. Howell).  Mary Ann, in particular, should have been running the island.And, yes, the Professor is an inspiration to most professors.  That the one guy with the PhD has the ability figure out the causes of any problem and can invent solutions.  We can't be the Professor, but we aspire to be.


Lastly, Brady Bunch...  Um, I got nothing.  What did you learn from this show that informed your social science imagination?
Posted by Steve Saideman at 4:44 PM