Quarantine, Week 3: Has It Been Three Weeks?


The themes of week three: confusion, outrage, sadness, and community.

Has it really been three weeks?  Time is going by so fast and so slowly.  How long ago was the Senate's failure to convict Trump?  Early Feb--not that long ago.  What day is it?  Well, it must be Saturday since I am blogging my take on week three.  Even though I often work at home and will spend summers going into the office just once every other week or so, the lack of ultimate frisbee one or two nights a week, going to the office not at all, and so on has caused my daily rhythms to fade into each other.  I am trying to keep weekends distinct--a different breakfast (French toast or something else requiring slighly more work than the usual toasted bagel*), focus more on the house than on academic work, and so on.  But it is easy to get lost time-wise.

The outrage this week went over the top thanks to Jared Fucking Kushner but has been a constant theme.  Disease happens, epidemics happen, but since we have excellent science and many relevant institutions, global pandemics require something else these days--the leading states to be led by those who fail us.  Xi and Trump have done their part to fan the flames rather than douse the fire.  Story after story, positive and negative, remind us that leadership matters.  The latest stories contrast US military leaders that acted quickly to prevent their troops from getting sick to those firing a Captain who was more concerned about the lives of his crew than his career.
What makes this so outrageous--that makes us so outraged--is that this was largely although not entirely avoidable.  It could have been mitigated, it could have been largely if not entirely contained.  There is so much that can be done.  As we see the graphs of different countries and of different states and provinces, we see that governance matters.  Most of Canada's premiers (governors) are doing the right thing, including the bombastic Trump-esque Doug Ford, who I voted against.  Florida and Georgia contrast sharply with Washington and California as, damn it, leadership matters so very much.  As I have been saying, federalism is both boon and bane here.  It is bad in that it makes it hard to coordinate, but it is good when the federal government fails to lead, states have some freedom to do the right stuff.

The American toll is starting to climb and will surpass most other countries (I don't believe the Chinese or Iranian numbers).  I have not lost any relatives or friends, although I just learned one of my friends has had a so-called mild (doesn't sound mild to me) case.  My niece recovered from a relatively mild case. Update: I just learned a second cousin's spouse has died.  Not someone I knew well, but someone members of my immediate family knew.  So, it is getting closer to me and mine.

In popular culture, the deaths are accumulating.  We lost Adam Schlesinger, who wrote some of most enjoyable music of the past twenty years--for his band, Fountain of Wayne, for the movie Music and Lyrics which my daughter and I enjoyed greatly, for The Thing That You Do, for Josey and the Pussycats, and, especially for Crazy Ex-Girlfriend. Likewise, I didn't know who Bill Withers was, but I knew his songs.  Damn, what a loss.  It is going to get much worse before it gets better.  April will be the cruelest month this year although May will give it a run.

How do we get through this?  Well, outrage at the assholes is perfectly fine... but focusing on the helpers as Mr. Rogers advocated is probably the way to go.  That and focusing on the fun and sweet stuff that we can find online.  I keep posting on facebook and twitter the short videos of people doing fun things, like the impressionist who made an Avengers in Quarantine video.  Or the one where a guy sings Corona-themed songs adapted from Disney movies.  Vulture asked tv screenwriters to write about how their characters would be behaving in the Time of Corona, and it was delightful.  These people are also helpers, perhaps not exactly what Mr. Rogers was referring to, but helping nonetheless.

This is an excellent summary/combo thanks to that wacky Canadian and superhero--Deadpool.

These folks online help to create and foster some community that is desperately needed.  We cannot gather in person, but we can gather online in slacks, on twitter, on whatever social media, via zoom or whatever.  One thing that is helping me get through this is the setting up of teleconferencing with old friends whom I haven't seen in quite a while.  This week, my winter league frisbee captain organized a gathering online to play silly games--trivia, pictionary-esque, etc.  Not as good as ultimate, but any port in a storm.  So, reach out to friends and family, stay connected, build new connections.

Be well, stay away from each other physically but not socially, and wash your hands. 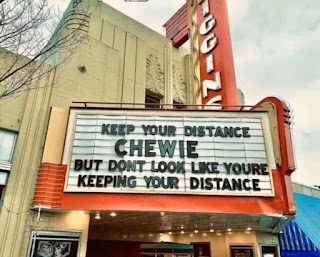 *I have a month's supply of frozen bagels thanks to a visit to Costco that was the "hey, what else do we need for awhile" trip after they were out of toilet paper.  I should have grabbed flour.  Alas.

Posted by Steve Saideman at 9:27 AM