Democratic Backsliding and the US: A West Coast Roundtable

Yesterday, I was part of a roundtable held by Simon Fraser University, which is located in Vancouver, on the erosion of democracy with a focus on the US.  I was joined by Jean Lachapelle of the University of of Gothenburg and Dietlind Stolle of McGill.  Dietlind and I started at McGill at the same time so it was nice to hang with her.  I live tweeted the event, but I wanted to summarize what they said and what I said here.

Jean is part of the V-Dem project, which measures democracy around the world.  He showed a variety of trends, including how the US's score has been in decline after rising in the 1960s and 1970's.  He focused on the role of parties and polarization.  That backsliding happens when major parties act to undermine democracy.  He was generalizing from a variety of places, like Hungary, but it very much spoke to the US case.  Indeed, in the various figures, the US tended to be closer to Hungary, Brazil, and the like than to democracies to whom we would prefer to be compared.  And then when he focused on parties, the GOP ended up being quite close to Hungary's Fidesz, to India's Hindu Nationalist Party [BJP], and the like.  The Dems moved a smidge, but in most figures stayed on the pluralist, democratic end of the spectrum.  Which meant that the US story is one of asymmetric polarization--that the GOP went nuts and the Dems have not.

Dietlind is a specialist on attitudes, so she discussed survey results of where Americans stand on the issues of democratic backsliding, particularly executive aggrandizement.  She showed that Republicans are generally more supportive of executive aggrandizement than Democrats. She discussed how the generally higher support by Republicans also stands out comparatively and is in part due to elite mobilization (aka Trump). She also showed that Dems support democratic backsliding as well, but only when an important policy is at stake (e.g. abortion, or lockdown).

What did I say?  Well, here are my slides: 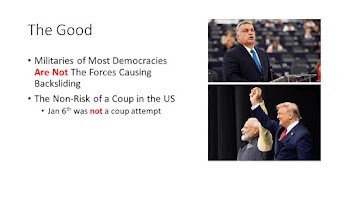 I started by noting that the backsliding of most democracies has not been caused by their armed forces.  There have not been coups in most of the cases that we are discussing: US, Hungary, Poland, Brazil, India, etc.  Turkey is the exception to be discussed below.
I, of course, discussed that the events on Jan 6 were not a coup--that individuals from the US military participated but not elements of the military itself. 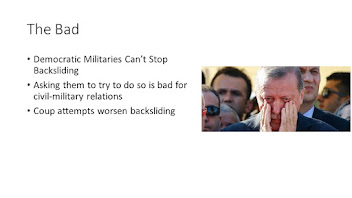 I then discussed the bad: that if we like our militaries, we can't hope for them to save us.  That militaries can't stop the backsliding since the backsliding is due to the stuff happening within and between parties.  Nicely connects with Jean's arguments.  Asking the military to help is actually bad.  I did note that coup attempts can make things worse, as the Turkish example illustrates. 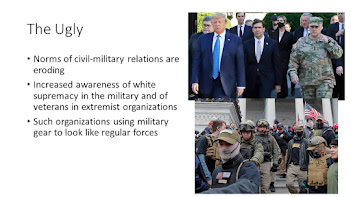 I then discussed the erosion of the norms of civil-military relations, which referred to the appointments of retired generals as SecDefs, Trump referring to his generals, and Trump politicizing the military by having partisan speeches with military folks as the backdrop.  I pointed out that the real troubling thing regarding the military and Jan 6th is it has helped to remind us how white supremacist organizations are infiltrating the armed forces and the role of vets in far right terrorist organizations.  Plus how everyone wants to dress up like Special Operations folks.

I then had to conclude with a Star Wars reference 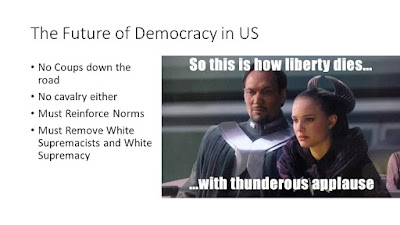 But that was not the end, as we had a good q&a.  Since I basically argued that my topic, civ-mil, was not so relevant, I made myself obsolete.  But did that stop me from talking?  Hells no.  When we were asked about where US asymmetric polarization came from, I discussed how it was a GOP-led thing from Gingrich to McConnell with a soupcon of bottom up (sort of) tea party along the way.  I did rant a bit about the asymmetry and the temptation by the media to run their false equivalence machines.  That the Dems want to expand the franchise and the GOP wants to limit it, and the latter is obviously the anti-democratic move.  As I have said before, #voterfraudfraud is an abomination.