Quarantine Report 52: Whatever It Takes

Many have commented how strange time is during this quarantine.   A week feels like a month, but it does sometimes seem like it was just yesterday that we were cancelling our trips and preparing for a few months of abnormality.  What made it such a draining week?  Lots of meetings and a guest lecture, I attended the big Ottawa defence and security conference virtually, and I faced stinging rejection.  A couple of fun zooms with friends.  And, yes, marking the year that was in quarantine with posts about the lessons learned, a discussion of the highs and lows in activities and such, and all the feels.

Rejection, as I keep saying, is inherent in the enterprise.  Yes, I have heaps of grant money to fund the activities of the Canadian Defence and Security Network for another five years (we are finishing year two of a seven year grant).  But I was hoping for more so that we could study the implications of the pandemic, and more resources would mean helping to correct some of the mistakes I made in the initial effort.  Instead, we will have to scramble a bit to do some of the stuff we have planned.  A bit more uncertainty and more grant-writing ahead.  I will eventually be de-briefed to find out what we could do better.  Revise and resubmit is the academic's way of life.

I spent Wednesday through Friday live tweeting the CDAI's Ottawa Conference on Defence and Security when I was not tied up with something else.  Usually, it is held in downtown Ottawa, and I just spend two days absorbing the info, meeting military folks and those interested in the CAF, and asking pesky questions.  I wonder if I would have had the guts to ask some of the questions I asked on twitter like: "Hey, former Prime Minister Harper, how do you feel about the global conservative movement you are trying to lead that seems either tempted or interested in appealing to extremists?" or "Hey, Minister of Defence Sajjan, if you don't use your authority to handle a situation, is that abuse of power or just misuse of power?"  See, I can be bipartisan!  A few quick bits of stuff I picked up along the way:

In Canadian academia, this is crunchtime as those writing Masters' Research Papers are now facing deadlines, so I have had some meetings to chat with students and much to read.  The classes have gone well this term, with the students very engaged.  It does not hurt to be teaching civil-military relations at a time where Canadian civ-mil is in its worst crisis in decades.

I had two fun zooms this week.  One with a pal from Texas Tech who has had to grapple with chairing her program in mid-pandemic.  The other was with the IR poker group where we have a zoom open and we play poker in another window.  Second game in a row where I have lost.  But I won in the larger scheme of things as there was much solace from hanging with friends, comparing beard lengths, and discussing retirement ages.

And, yes, I made Nigella Lawson's chocolate chip cookie dough pots to celebrate the year of quarantine: 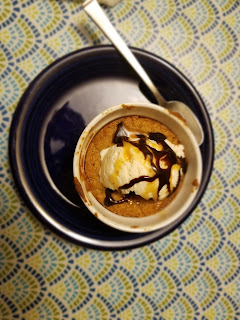 I have gotten through this year by hanging out with friends on zoom, by stress-baking/eating/exercising, and by complaining constantly.  As Captain America said: