Spring is here, as is the predicted third wave.  This is an early spring for us, as the snow is almost entirely gone a month before it usually melts away.  I moved my sporting equipment around last weekend--winter stuff back in the basement storage, bike off of the wall--and biked around a bit.  It was definitely a relief to be able to get out and about without layers of winter clothing.  And, yes, thoughts are turning to summer ultimate as I seek a Wednesday team, am thrilled at the development of a Sunday league for the middle aged (Masters) and elderly (Grandmasters).  I am getting to the point where a Great-Grandmasters league would be super handy, but yet I am aspiring to play three days a week.  We shall see if I can manage that, but I desperately  need the silliness and the fun and the camaraderie.

It was a superbusy week in CDSN-land.  We had our Capstone event, which featured the best of 2020 from our partners.  I am very proud of our team and our partners, as the event went very well even as we didn't get the chance to hang out in person.  I had multiple meetings aimed at improving the network this week, we put out another podcast, and I got to present some of our COVID Response research on Friday at the Faculty of Public Affairs's research series along with other contributors to an edited volume.

On the publication front, I got another rejection, but with really positive feedback from two of the three reviewers.  So, we will resubmit elsewhere.  This is normal when one aims for the top.  It ain't heartbreaking, and this one wasn't even that frustrating.  As I keep saying, rejection is inherent in our enterprise.

In teaching land, my Civ-Mil class shifted from collective conversations about the readings to student presentations of their research.  This usually means less work for me since I don't have to do any reading before class BUT this year happens to be "change your topic a week before the presentation" class.  So, I have been meeting with students as they try to shift at the last minute.  The same thing has hit some of the PhD students as they work on their proposals.  Makes more sense in that class since we have moved that class from first half of third year into second half of second year.  It is also the season for students to ask for feedback on their master's research project, which is due April 1st.  So, heaps of reading for all these days. 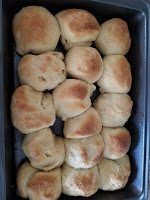 On the pandemic homefront, most Saidemans are now vaxxed at least once except for my daughter and two nieces, Mrs. Spew, and me.  My mother can now scoot out and about and be social and shop on her own after a year of being trapped in her apartment--a huge relief for all of us.  I made Hawaiian buns that worked out pretty well, so that is the new baking effort.  Today, I will make Detroit style pizza, which involves a heap of dough and rising.

Thanks to Biden doing mostly pretty well, I can save most of my anger for Doug Ford, my premier (governor).  Ontario is actually opening things up even as the third wave is hitting the hospitals really hard--they hadn't really recovered from the second wave.  About a month ago, there was a provincial health press conference, where the doctors were describing the likely effects of the variants--huge spikes to come--and also announcing openings.  A reporter asked "this sounds like a disaster," and the doctor said ... yeah.  And here we are.  Canadian vaccinations are behind American ones (no domestic production) and being mismanaged by the provinces.  Federalism is definitely both boon and bane here, and with Ford, mostly bane these days.  I don't expect to get vaccinated until June.  Carleton did ask about teaching preferences for this fall.  Since I can't really expect the students to get shots before classes start, I asked for online.  We shall see what Carleton does.  They have consistently made the right, safe decisions, but not sure what that looks like in the fall.

Time to read more MA stuff.  Have a great week!