Ardennes is not Arduous

Driving in the Ardennes is bit bumpier.  The roads are still superior to Quebec's (not saying much), but the ones around the Ardennes do have some imperfections.  Still, it is a pleasure to drive while thinking "is this good or bad tank country?"  Anyhow, some observations along the way: 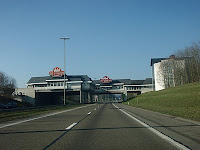 Posted by Steve Saideman at 4:40 PM