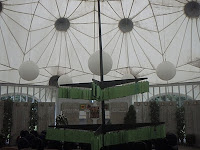 I spent my first day of the last research trip for the book on NATO and Afghanistan driving from Brussels to Arnhem.  The point was to learn more about Operation Market Garden, which used heaps of airborne units in a risky (foodhardy in the extreme) to try to seize some bridges so that the Allied forces could go around the German defenses.  My interest in this particular effort was re-ignited due to the part played by Easy Company as depicted in Band of Brothers and by renewed interest in seeing how over-rated Monty, perhaps the most famous British general of WWII, was/is.

So, I went to a museum near Nijmengen that had some good displays and the standard tank.  Not only did the airborne units grab the bridges but eventually the armored column (hint, never plan a fast advance that relied on a single road) got there too.   They had an interesting memorial which looked to be under a ceiling consisting of parachutes. 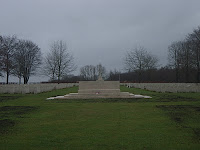 After that, I went to a largely Canadian cemetery, as the Canadians played a major role in the Netherlands both as part of Market Garden and afterwards, doing much of the work of liberating the country from the Germans.  An appropriately gray day. 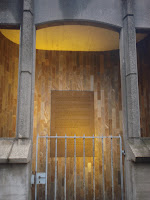 I then drove to Arnhem.  I cross the bridge that was too far--that it was simply too far for the armor column to reach it, so that the Brits and Poles who had been airdropped nearby had to give it up after running out of ammo and supplies.  This memorial commemorates the battle and the sacrifices--paid not just by the troops but also the citizens in and near Arnhem.


I then got to the Airborne Museum in Oosterbeek just before it closed.  It had some great footage shot during the battle, and they did a very nice job of bringing together artifacts, personal stories and history.  My favorite pic: 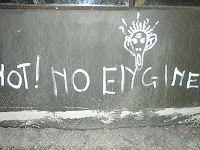 Written on a glider--the full phrase: wot! No engine--a good description for gliders. 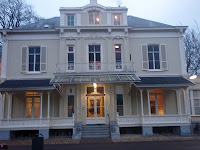 The glider and other stuff was in this building--a hotel that was the HQ for the German commander (Field Marshall Model) and then the HQ for the British commander of the folks around Arnhem.  The building, the Hartenstein, was restored after the war and eventually became a museum.


What did I learn?  A variety of things but perhaps most notably: the British tried to lay blame on the Poles who provided a key hunk of the airborne units for the failure of the mission.  But the failure clearly laid in the hands of the senior commanders, especially Monty but also Ike for approving a plan that relied on wishful thinking.  It was a gamble, and I guess it was worth a shot since a success would have meant a much shorter war, and losing here did not endanger the war war effort.  Still, hope, as Mike Lombardi always asserts, is not a plan.
Posted by Steve Saideman at 2:40 PM