I cannot say how incredibly touched I am, after reading one of McGill's student newspapers--the McGill Tribune: 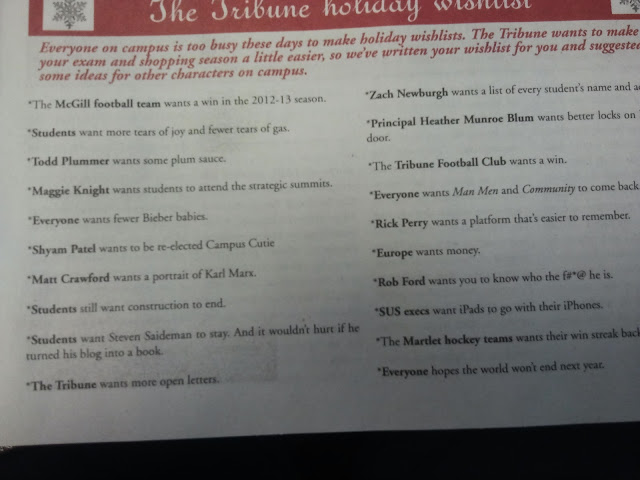 Check out second from the bottom on the left side.  The first part is a very sweet wish, but one that I cannot grant.  I am already quite committed to moving on to my next position, but appreciate the sentiment.  In making the decision to move on, the most significant force pushing in the direction of staying here was my admiration for the students here.  Alas, the new opportunity presented so many reasons pushing in the opposite direction.

Regarding the second one, well, my first thought is: I wouldn't want to do a book version of my blog as that would mean word limits, editing and other inconveniences.  Plus then it would not be free--someone who have to pay for it.  But then I realized that the interest in a book might be referring to something I have been thinking about for quite some time: A Yankee on Ice: An American's Observations of Canada and all that is Canadian.  I have been thinking about writing a non-academic book about all the things I have learned during my time in Canada and in Quebec.  Some of these have appeared from time to time in my blog, so I may actually satisfy this holiday wish but not during this holiday season.  That would be the book after the book (what does the war in Afghanistan tell us about Canada) after the current book (NATO and Afghanistan).

Anyhow, the McGill Tribune gave me an early holiday present, and I am most grateful.
Posted by Steve Saideman at 2:51 PM

How about on 'thin ice', for more literary effect?
We are already looking forward to the book which will definitely be cool.