A Stunt Too Far? 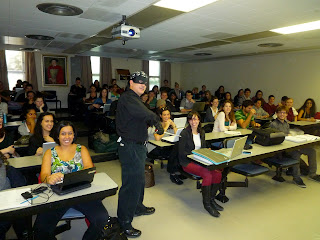 Every year or so, UNICEF dares professors of the big classes at McGill to dress in costume on or near Halloween if the students kick in enough donations.  I am a sucker for silliness, a hound desperate for attention, and am a big fan of Halloween* so, of course, I am willing to go along.


*  My enthusiasm for the festivities were re-kindled when we lived in Lubbock.  I am not sure whether it was because we had a kid which made the holiday more entertaining or that the Halloween-deniers (family fun festivals to divert kids from the satanic rituals of Halloween) there caused me to react against them.  Probably both.

In the past, I was Indiana Jones as Halloween fell on the same day as my colonialism lecture and Che Guevera when the festivities were on the same day as my Cold War lecture.  This year, the topic du jour was International Political Economy, so why not my favorite pirate: Dread Pirate Roberts.  While the students in the big class may not have been able to detect it, I made a significant sacrifice nicely timed with the beginning of Movemeber: I shaved off my beard and kept the mustache to appear more like the Princess Bride* character.


*  It was nice to see the enduring relevance of that fantastic movie.  The students more or less got it.  My other idea was to be Marty McFly since my father cleaned out his closet (well, sort of) and gave me a winter vest that looks like a life preserver (with resulting joke for Marty in the movie).

I did allow the students to offer up suggestions, but it is too soon to be Zombie Qaddafi.  Plus the joy of being Dread Pirate Roberts is two-fold: when I leave McGill, my replacement could wear the same costume (since there had been so many folks who helped to make up the legend of that pirate); and I could actually add a little action to the stunt.  Below is a limited video--it missed the attack of the Rodent of Usual Size (Rodents of Unusual Size exist only in the fire swamp), but caught my response.  The TA holding the camera, well, has a unique style.
One of my facebook friends pondered whether there was any limit to my stunts, and, given that this is my last year at McGill and the last time I will be teaching 600 undergrads ever (my role at NPSIA at Carleton will be to teach much smaller graduate courses), the answer is that there are few limits.
Posted by Steve Saideman at 8:52 AM

Email ThisBlogThis!Share to TwitterShare to FacebookShare to Pinterest
Labels: humor