We Are All McGill Protest 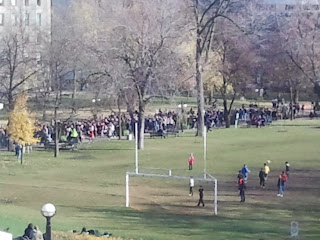 At this moment, folks are gathering to protest last week's deployment of riot police on campus, which, in turn, was sent to deal with the occupation of the administration building.  And yes, one of the big downsides of my move is that I have a great view in this office.  I have no idea what will be my view in Ottawa. 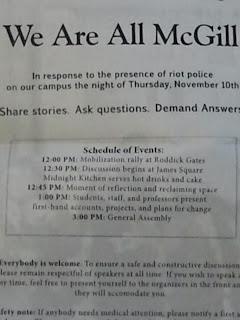 Very organized--complete with medics, hot drinks and cake!  I think these folks do have several major points

I am concerned about a number of assertions by various sides.  The Occupiers asserted that their movement was not violent, but they stated that they essentially pushed and shoved their way in.  Not that it justifies anything, but their moral high ground is not so tall and innocent.  There have been calls for the political science department to assert its moral authority, but I have to wonder where such authority comes from? A mandate from the masses? From a watery tart throwing a sword? Because we have people who study political expression (political theorists)?  Um, in my old job, one of the most utterly corrupt and evil-doing evil-doers was a theorist, so I am not sure that the study of anything in particular lends moral authority/supremacy.  It may lend expertise on how to respond to dissent (the literature on social movements tends to assert that repression does not work, but that is highly conditional).

Indeed, I think the best thing that everyone can do is to be a bit humble.  That is: we don't really know how things played out, who started what, and how it should have been handled.  Jacob Levy (who does have a heap of moral authority granted to him by, well, me) had a great set of tweets this morning addressing the need for planning ahead of time.  That making things up along the way is a recipe for a bad response.

I have no expertise on the events here at all.  I was not there.  I don't trust the statements of the biased people who were there.  I do find the commenters on my blog who were present to have pretty credible accounts.

We live in interesting times.

I agree that this isn't a clear cut issue. No one side is entirely wrong or right. However, on Thursday as I walking home after studying I was met by riot police, police on horseback and police with their sticks out. They were blocking my street and McGill security would not let me into any of the buildings to seek safety. I essentially was in the middle of a hostile situation. Many other students had been evacuated from buildings and libraries. I support tuition hikes, but I do not support intimidation and violence on our campus. The massive police presence only escalated the situation. I have lost faith in the McGill administration and their ability to keep our campus safe and listen to our concerns as students and staff.

Your point about securitization is an important one. No longer do authorities - especially police authorities - ask in public about what really constitutes a "security threat". It gets more and more difficult to avoid the appearance that police forces suffer from the "if I had a hammer" problem.