I Do Believe in Magic 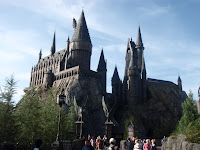 Well, magic created by heaps of imagination combined with passion and money: the Wizarding World of Harry Potter met and then exceeded expectations.  The butterbeer was great (ask for the frozen version rather than the soda version, although the latter is good, too).  The primary ride, the Forbidden Journey, was terrific.  The buildings, the costumes, the stuff they were shilling were all wonderfully derived from the books and movies.  I have never had to exercise as much restraint when souvenir shopping in the toy store (Zonkos), the candyshop (Honeydukes), the clothing shop, and so on.  Just great stuff, well made and fun but super-expensive.  This small hunk of the park must be paying for the entire Universal Studios of Florida.  And it was mighty crowded in that one section, much less so in the rest of the park.

I am sure they will make some changes down the road, as the Universal folks really did cram in a lot into a small space but left much potential to be realized.  My guess is that the Lost Continent area, which already lost some space and a ride to JK Rowling's spawn, will ultimately be erased and replaced by more HP stuff.  We spent sometime speculating about the possibilities (guidebooks like Frommer's offers similar growth suggestions):
What am I forgetting?  All I can say is that the entire Islands of Adventure was a heap of fun (even with the Spidey experience out of commission) but more HP would be, well, more!