Breast is Best but Confused

I saw this piece last night at Jezebel and went on a twitter tear.  Why? Because of searing memories from nearly seventeen years ago.  So little has changed in this area, compared to pretty much everything else. The Jezebel story asserts pretty convincingly that doctors know diddly about lactation despite the past few decades of increasingly pressuring women to breastfeed their babies.  Yes, yes, yes, breastfeeding is better for babies, but it does not always work out very well.  When people insist that breastfeeding is natural, I retort: so is infant mortality.  Why?  My tale from long ago:

When Teen Spew was just a few days old (Baby Spew), the timing/connection for breastfeeding to work didn't synch up well.  A sleep-deprived Mrs. Spew and I were averse to trying anything other than nursing because we were told that using bottles even just a little bit would mean that the kid would not be able to return to the breast.  Yes, my wife got some help from the lactation experts at the hospital, but not before we had to go back to the hospital a couple of days after my daughter was born--she was dehydrated, which amped up her slight jaundice.  Which led to a little game I like to call "Pin the IV on the Dehydrated Newborn."  Watching a nurse or two try to put the IV needle into my daughter and failing again and again was pretty painful for me to watch probably painful for her.  They had to get a nurse from the neo-natal intensive care unit to find a spot to insert the IV and where did she choose?  See below: 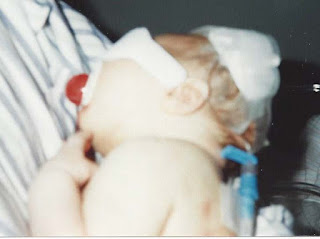 The red thing is a pacifier, the white stuff over her eyes were to shade her from the lights used to deal with the jaundice and that thing on the back of her head is the IV.  Lovely.  Just freakin' lovely.

My wife and baby Spew finally got the connection going and managed to do the nursing thing quite well for quite a while, but the first week was hell and damn near killed the kid.  So, I have a great deal of sympathy for women who cannot get the breastfeeding going, and a great deal of animus towards the medical community for failing to research lactation with even a bit of the enthusiasm erectile dysfunction has received.  One area involves life, death and the health of babies; the other involves men's sex lives mostly in the second half of our lives.

Good to know where our priorities are.

Posted by Steve Saideman at 9:54 AM

If we had gotten to see the lactation consultant before Jess' birth and had a rental electronic breast pump in place, we'd have been all set. But curiously that stuff was not part of our pre-natal class. My faint hope is that they cover that sort of thing now. We were dealing with a time when hospitals still sometimes sabotaged breast-feeding, which lead to all the dire warnings. I also hope that everyone is on board enough now to not worry so much about it.