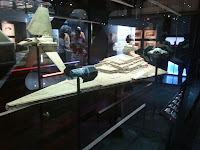 My daughter and I went to the Star Wars: Identities Exhibition currently in Ottawa at the Aviation Museum.  Teen Spew noticed that the exhibition and the site only started to relate to one another when we got to area that had the models of spacecraft that were used to film the trilogy (just realized
that none of the craft in the big space model showcase were from the prequels).

The exhibition has the actual costumes, puppets, models that were used to make the movies as well as the art used as they moved the characters/scenes/etc. from the screenplay to filming.  I highly recommend the exhibit when it visits your town.  It was a heap of fun.

One of the most interesting things about the Exhibition was that a common theme tied the whole thing together--Identity.  Where does your identity come from?  The exhibition was split into various segments: species, genes, parents, culture, friends, events occupation, personality, values. So, we all got wristbands with chips inside that we had to (if we wanted to play along) put against panels at 12 different stations as we answered questions and registered our preferences to shape our ID.   Some things we could choose.  I chose to be an alien (see pic below).  I did not get to choose the seminal event that shaped my character: 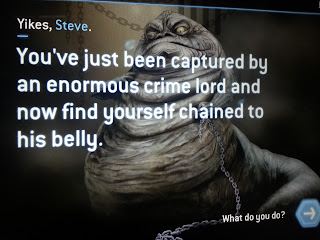 But I did get to choose how I reacted to it--doing my best Leia-imitation.  Since the animated show had this particular kind of alien on a water planet, I chose among a limited subset of planets Kamino--where the clones were made in the second prequel.  And I chose Chewie in several categories--as a friend, as a personality type (loyalty).  As my occupation, I chose.... Jedi, of course.

Anyhow, it was funny to see how the exhibition approached identity--no inter-subjectivity to it at all--complex, partially by choice, partially not.  The last panel before seeing the character gave you a choice--accept or refuse the Emperor's offer to join the dark side.  Seems purely a choice, but given all the steps ahead of time, perhaps the choice is guided by one's identity.  The contrast between Anakin and Luke was made many times over the course of the exhibition--Luke had better parents as Uncle Owen and Aunt Beru gave Luke some limits and Shmi was too lax, apparently; Luke had better friends, and so on.  So, I chose, of course, to refuse the Emperor's offer.  As did Teen Spew, who chose to be a Wookie from Endor (no, it does not make that much sense but it is her destiny, not mine).

In the last room, they show what you look like along with the key event, your homeworld and your mentor which was also in the email the exhibition sent with the details of my decisions:

I was raised on the ocean planet Kamino, where members of my community made their living working in the cloning facilities. On holidays my best friend and I would traditionally watch the thunderstorms from the rooftops of Tipoca City.
My parents raised me with a mix of independence and support, and I inherited my strong set of motor control abilities from them. Later on I spent some time with the brave Wookiee Chewbacca, whose guidance left me with knowledge I still use every day in my job as a Jedi Knight.
I remember this one time when I was captured by a crime lord and chained to his belly. I didn't let this affect me too much, though; instead I used my chains to throttle the crime lord to death and escaped.
People often tell me I’m a generally adventurous and curious person, I also tend to be energetic and social. But the most important thing to me is self-direction: I believe that living in a free world means we all have the right to choose.
I have pretty strong powers with the Force; I guess that's why the Emperor came looking for me. When he offered me limitless power in exchange for my allegiance, I fought the urge to join him and his evil minions and rejected his offer.

One last thing: it turns out that mentors play a big role in shaping identities.  As a professor and supervisor of a number of grad students, all I can say is uh-oh!

PS  Oh, and the most tempting thing at the exhibition was not the Emperor's offer, but all the Star Wars schwag in the gift shop.  I bought Darth Vader and Son, a highly entertaining picture book for kids, and my daughter got a Metal Rules (with C-3PO and R2D2 on it) t-shirt and a SW cookbook.  They had nice robes but I am already well equipped.

Posted by Steve Saideman at 9:31 AM