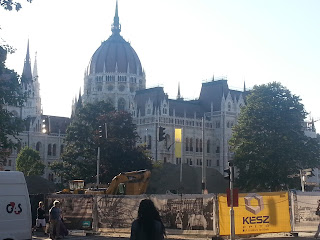 Going to the Third Parties and Ethnic Conflict workshop at Central European University, organized by Erin Jenne, was all kinds of deja vu for me.  First, other than London (mostly one spring/summer program in undergrad plus visits back since) and Stockholm (one July in grad school),  Budapest is the city outside of North American in which I have spent the most time: two weeks of research in 2002-03, a week of summer teaching at CEU a year or two later, and now this trip.  Second, and, more importantly, outside folks getting involved in ethnic conflicts is where my career accidentally started.  I didn't go to grad school expecting to work in this area, but it is the way it worked out.  Third, the cast of participants included some old friends--Erin, Monica Toft, Will Moore, Idean Salehyan, Kristin Bakke, Sara Mitchell, Steffan Wolff and Brandon Valeriano.  The rest of the participants included people I met once or twice before and folks who I had never met, but the balance of people were old friends.  My unplanned journey the through the profession has meant
meeting a bunch of terrific folks along the way.

Anyhow, the real deja vu was the topic at hand--understanding who intervenes and to what effect.  Most of the papers related quite directly to my work and/or that of my students, so when I wasn't saying "this is what I would have done", which is the typical academic question, I was saying, "this is what my students did."  So, when Steffan Wolf spoke about success and failures of UN peacekeeping, I had flashbacks to Sarah-Myriam Martin-Brule's dissertation, especially as Steffan was taking seriously the partial successes (which SMMB broke down into partial successes and partial failures).

Artak Galyan was focused on how political institutions interact with ethnic diversity in various ways, harking back to my CPS piece about a decade ago.  I liked how he thought about different combos of institutions and ethnic configurations (polarized, concentrated but not fractionalized).

Erika Forsberg, whom I bump into about every five years, has been working on ethnic ties and intervention for almost as long as I have.  So, it was interesting to see how she was doing it similarly to what I did and differently.

Monica Toft and Kristen Bakke presented back to back on North Caucasus stuff.  Monica's paper was an interesting analysis of data to contrast nationalist and religious dynamics within the region, including a very provocative finding about the timing of violence--the religious extremists tend to engage in violence on their holidays.  I pondered whether nationalists attack on their holidays or on the holidays of their targets (Boston Marathon came to mind).  Kristen's paper focused on the impact of outsiders--that the transnational extremists who joined the fray in Chechnya did produce some backlash.

I was a discussant for two papers: Sara Mitchell's on interstate conflicts and the related water disputes affecting internal conflict and Erin Jenne's paper on how regional contexts affect mediation.  Sara's paper was my most recent taste of water stuff, as my very first grad student, Sam Stanton, found that of environmental scarcities, water was the only one that really influenced ethnic conflict (if I am remembering correctly).  I found her finding that water quantity matters more than quality to be most interesting--downstream folks can subsidize the upstreamers to keep the water clean, but a distributional fight is still a distributional fight.  Erin's paper was striking in that regional strife makes mediation hard, but regional peace is no guarantee of success.  It reminded me of hegemonic instability theory.

Will Moore's paper was about as half-baked as mine, but showed how hard the "contentious politics" folks have it as their various obsessions tend to be very much inter-related--protest, rebellion and repression--requiring more complex modeling.  The best line of this session was when Idean, the discussant, said he wouldn't want to co-author with either of us.  You probably had to be there.

I have been doing this stuff for more than twenty years, with 2013 marking the 20th year of my PhD defense (the celebrations and re-enactments will occur in November).  When I started out, few folks were doing the IR of ethnic conflict, with David Carment, now a colleague, writing pieces justifying the endeavor.  No need to do that anymore.*  Now, there are heaps of folks out there doing very interesting and far more sophisticated, nuanced stuff in this area.  That is great because it just means more citations of my stuff ;)  Well, that and more criticisms, challenges, dynamic interactions (arguments) and workshops in cool places like Budapest.


* Only those with limited visions even dare to ask whether civil wars and ethnic conflict are relevant for IR scholarship.