The shutdown story of the morning is that a bunch of veterans in DC wanted to go the World War II memorial, but the way was blocked due to the shutdown.  I am kind of confused since the DC mall is an open place and there is no need for anyone to guard or hang out at the memorial--why does a shutdown mean a fence?  Anyhow, the cool images are bouncing along the internet: 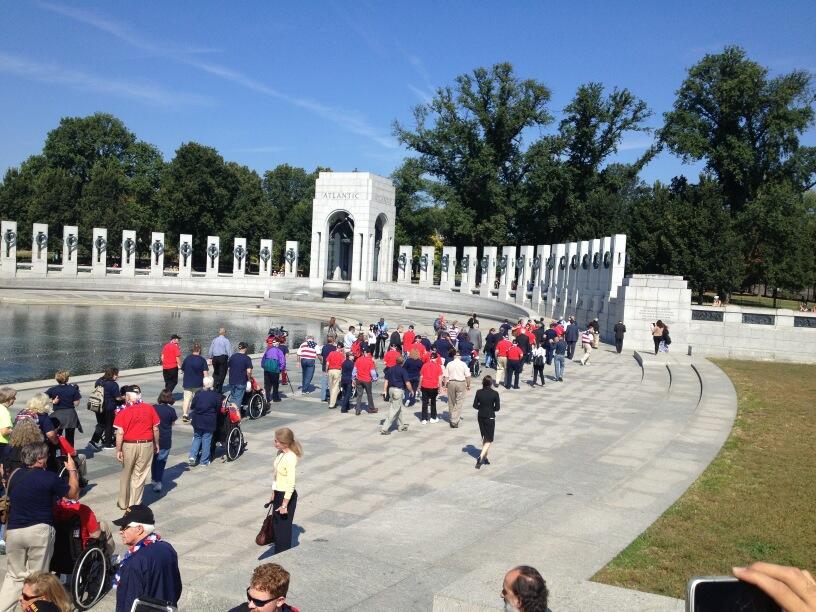 Sure, I get it--folks who sacrificed much were inconvenienced by the shutdown, engaged in a bit of civil disobedience and raised a mighty middle finger to the folks at the end of the mall (Congress, not Lincoln).  But the fact that this manifestation of the shutdown's effects will get far more play than lots of others that are are less symbolic and far more consequential is as appalling as it is unsurprising.

The basic truth of American politics is that old folks rule, young folks are sidelined.  Yes, these guys are vets and have a high price for their service, but we should take more seriously how government policy affects the people who will be serving in the future as well as working, employing, building, and doing everything else.  Government medical policies are very twisted--much more focused on the last few years than the first few.

The reality, of course, is that old people vote and vote selfishly, and that young people do not vote.  Social security, medicare and similar programs swallow the overwhelming share of non-defense spending.  And that probably should be the case, but the deficits we are amassing will limit the options for the next generations.  We see this already, as the past few years have seen significant cuts in programs for the young but no cuts or reforms in Social Security and Medicare.

I get it, I really do.  The politics of this are really hard.  But I find it problematic, and so I will not cheer so much that the story of the shutdown will center around these vets.  I would rather see stories about what this will do to head start and other programs for those who cannot yet vote and for those who do not vote as much as they should.  Alas, these pics are the easy ones and they are the ones will be seeing tomorrow.