Viral in the Internet is Not Viral in Reality

This has been a week of stories about academia going viral: privilege checking (which I covered earlier in the week), trigger warnings, and protests against commencement speakers epitomize this trend.  What is the trend?  That there are a few places maybe over-reaching when it comes to being sensitive about something and then the story gets played up and sped up and disseminated widely via the internet.

In these stories, the reality is that these things are happening in a few places and mostly leading to debates within these places about how much self-awareness/other-awareness/sensitivity is too much.  The twitter-spin makes it sound like academia is collapsing under the weight of pc-ness.  Not every un-PC commencement speaker is facing an uproar.  Protests against controversial speakers is an old game.  At Oberlin, some folks even protested the site of commencement as an arch dedicated to Oberlin alumn who died in the Boxer Rebellion in China was (is?) viewed as supportive of imperialism.  If you are an interesting speaker, you probably pissed some folks off and there will be protests.  However, free speech cuts both ways--you are free to speak and others are free to protest your speech.  Both sides should be and generally are acceptant of this reality.  That some folks refuse to show up when they are likely to be protested says something about them, unless there is a real security threat.

Maybe it is a slow news week?  These stories play up small problems at a few places and largely ignore  the bigger issues facing higher education--the decline of state/provincial funding and what that means for tuition, the adjunctification of teaching, and so on.  The only thing that went viral like this is the figure: 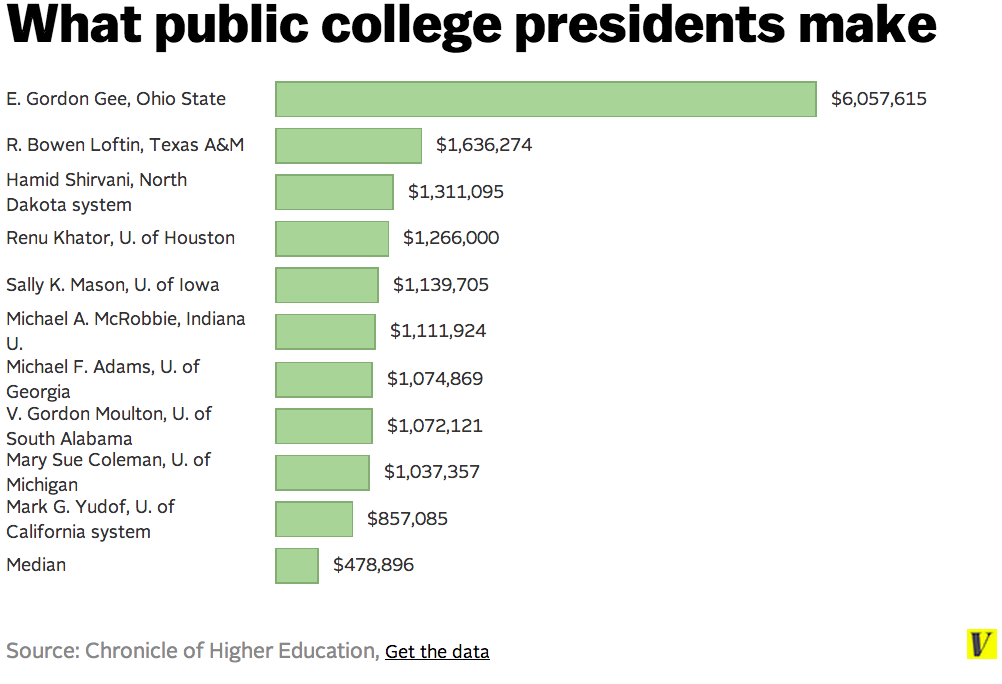 This went along with a story that said that the higher the university President's salary, the more debt the students have and the more adjuncts are doing the teaching.

So, we tend to focus our attention on the possibly of political correctness destroying our universities, which is nice distraction sauce for the real problems--distorted priorities, 1%-ishness, and all that.

So, when you see some story going viral about how free speech is being squelched due to liberal sensitivities, think twice before tasting the distraction sauce.  Maybe there are other problems that are more fundamental and more threatening.

Posted by Steve Saideman at 5:22 PM