I have been called out on twitter for my referring to Edward Snowden as "essentially a Russian spy."

Do I have evidence?  No.  But I am not a prosecutor or a cop.  So, when I say such stuff, I am offering my opinions.  Based on what?  On inference.  How so?

Well, a guy seeks to penetrate American intelligence agencies and their computer systems to download secret stuff.  Then he flees to countries that are adversaries of the United States.  He is welcomed and seems to be employed these days by Russia.  The decisions to allow Snowden into Russia and hang out must have been made at the very highest levels--by Putin.  Either Putin is a huge fan of complete transparency and the freedom to engage in dissent or he has other reasons for supporting Snowden.  Is Pultin altruistic?  Um, no.  Is he a fan of transparency?  Not in his country.

In the good old days of the Cold War, there would be very few questions about what is going on.  Here, because Snowden blew the whistle on the National Security Agency's domestic spying, he is seen as a whistleblower.  And I would agree if that is all he did.  But he went further than that, releasing a bunch of information about American intelligence and cyber operations that really did not need to be released.

It kind of parallels one of my rules of writing--just because you learn something does not mean you should include it in your article/chapter/dissertation.  If you want to point out that the NSA has been doing illegal stuff in the US, that does not mean you need to release information that might just be helpful to other countries and undermine the US position in the world.

This, of course, leads to the following response: 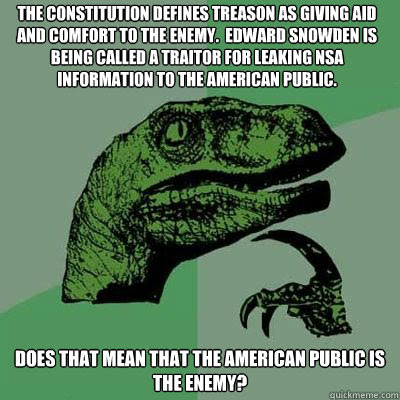 But the enemy I have in mind is not the American people but Russia.  Russia is not at war with the US, so it probably does not quite count as aid and comfort to the enemy.  But Putin has made it abundantly clear that he is not a friend/partner.

Again, I draw a very thick line between Snowden's two sets of activities--revealing that the NSA was doing questionable things in the US and revealing America's secret activities in the world.  Naive folks may think that gentlebeings do not read each other's mail, but in international relations, you don't have to be a Realist to understand that spying and counter-spying is endemic to the enterprise.

A caveat--I have not written much on this before because I am very ambivalent about much of this.  I have long been frustrated with Obama's policies on surveillance, secrecy and all that. Still, I cannot help but consider Snowden a defector.  Maybe it is that I grew up during the Cold War, but anytime an American flees to Moscow, I have to question their motives.  And when they do so while carrying heaps of American secrets on flash drives, I develop some assessments.

Jeffery Lewis has a post that sets out a time line of Snowden's activities and raises questions about some of the individuals from wikileaks that have been minding him in Russia.
http://lewis.armscontrolwonk.com/archive/7258/a-few-words-on-ed-snowden

As a thought experiment, let's assume for the sake of argument that Snowden is what he claims to be. He learns of abuses and wants to blow the whistle on them (and the Guardian did score a Pulitzer on the basis of the information he provided them).

So what are his options? Well, he could go the Ellsburg route and feed the info to the NY Times or Washington Post, but it's not 1971 anymore, and the Times and Post have a much cozier relationship with power than they did back then.

He could hand it over to Wikileaks and stay home to face the music, but it's not 1971 anymore, and the music plays a lot different these days. Whatever one thinks of Chelsea Manning, the way she was treated should send a cautionary note to any whistleblower who imagines that he'll get the Ellsburg treatment in 2013.

So then your option is to leak and run. And at that point, but it's not 1971 anymore, so your options are limited. Sure, go to Ecuador or Cuba, but you better hope the next change of government doesn't make you a bargaining chip with Uncle Sam.

Thus, you end up in Russia and use that flash drive as the only leverage you have. I'm not saying I would have done it because I wouldn't have. But I'm not sorry that the information that won the Guardian a Pulitzer is now part of the national conversation.

Do I wish Snowden ill? Not at the moment because there are two things I don't know: 1) what were his motivations?; and 2) has the information he has leaked/provided to Putin done real damage to U.S. national security?