I was going to write a post last week marking the 5th year of the Spew (my very first post is here), but I ended up focusing on my testimony to the Canadian Parliament instead.  So, here's my belated take on five years of blogging.

I am in a much different place now than five years ago--not just Ottawa versus Montreal, but all that came with transition and then some.  I am now at a policy school were public engagement and policy relevance are more directly part of the mission.  When I started, I was looking to move, and now that I have moved, and I am not thinking about moving again.  I was pretty frustrated when I started blogging, and am pretty damn happy these days.

Anyhow, blogging has been very, very good to me (cannot find the classic SNL video to insert here, sorry).  How so? 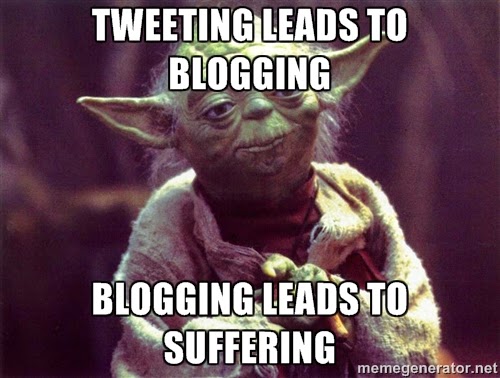 I still kind of blush and stammer when people say nice things about my blogging, but I tend to respond poorly to compliments in general (despite fishing for them constantly).  But I am proud of many of my posts and am embarrassed by only a few.  I do think I have made a contribution to getting this social science stuff out beyond the ivory tower.  I promote not just myself but also the best work that I have read.  I have provided heaps of advice, mostly unsolicited, about the profession, including tips on CV writing.

I did not expect to become such a fan and even blog-evangelist when I started.  But it has worked out so well for me in a variety of ways that I cannot help but promote it.  Not everyone should blog, but I do think that every institution should have one, which has led to NPSIA's blog.

I wonder what the next five years of blogging will bring, but if it is half as positive than the last five, then I will be most thrilled.