Who is Doing What in Counter-Isis Campaign?

The Atlantic Council has an interesting graphic about the missions in/over Syria/Iraq.  It is a bit hard to read.  The parts most interesting to me include: 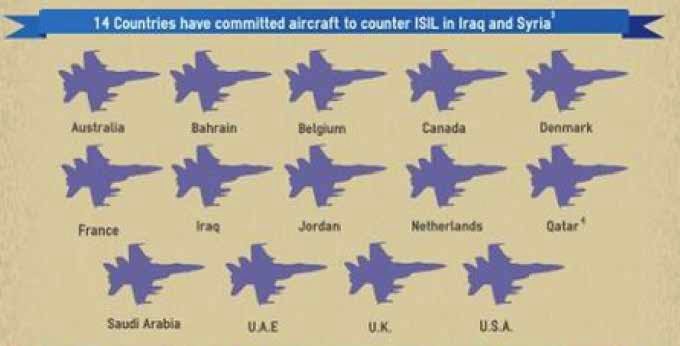 With the footnote for Qatar indicating that it is patrolling but not striking.   This would suggest that the rest of the countries are striking.... And I would not be so sure about that: have Bahrain, Jordan, Saudi Arabia and UAE done more than a token strike?

So, the division of labor remains as we understood it: US and Arab allies engaged against Syrian targets; US and NATO allies/partner (Australia is a frequent partner) plus Iraq engaging targets in Iraq.  Note that while the big picture I link to has all 28 NATO members participating, only seven NATO countries are engaged in airstrikes--one less than Libya.  The differences?  No Norway or Italy this time but the Dutch are now dropping bombs, which they didn't do the last time.

The US, unlike Libya, is doing the overwhelming majority of the strikes.  Is 63 non-US strikes divvied up by five Arab countries token or more than token? Hmm.  Eight non-US countries have 126 strikes among them--15 or so per.

It is certainly an allied effort as the Atlantic Council graphics depict, with other countries contributing money and training for the Kurds, Iraq, and even for some Syrian forces.  But some notable omissions even in those less "kinetic"/risky efforts: that Turkey has only given humanitarian aid, for instance.

Some of this will change as the mission goes on and on.  Will Canada stop after six months?  I don't think so.  And no, that would not count as mission creep to keep on doing what it is doing now.