Evil and the Agent-Structure Problem of American Racism

I was listening to the "Do You Like Prince Movies" podcast while biking today, and it got me thinking.  Alex Pappademas and Wesley Morris noted that Hollywood tends to depict people who have messed up lives by having them eat out of Chinese takeout cartons.  This is anti-takeout-ist they noted.  Eating out of takeout cartons is not wrong!

Anyhow, their conversation eventually turned to the appearance of President Obama on the Marc Maron podcast.  Alex expressed his frustration with the discussion of the murders in the Charleston event as evil, that it allows us to shrug and move on, rather than consider why the event happened.  And this got me thinking while I biked along a particularly beautiful part of Ottawa about evil and the agent-structure problem of Racism in the U.S.


As a quick caveat, I am not an expert on any of what I am about to discuss.  I am starting to realize how apt the name of my blog is as something that is spewed is not filtered.  Something that is semi-spewed is only partially filtered.


I don't want to be too social science-y, but when I think of the Charleston event, I don't want to let anyone off easily.  That is, if we blame society or politics, we focus on the social/political structures at the expense of agency--that this one individual had free will and chose poorly, so very badly.  If we focus on the individual, that the perpetrator was insane or racist or whatever, we tend to gloss over the conditions that enabled him and even encouraged him to kill nine innocent people.  The reality is that both matter and both... can be understood and perhaps even treated via social science.

Observers/pundits/folks trying to make sense of events like this prefer to privilege one side or the other, the actor or the structural conditions, and get upset when people focus on another aspect.  Nobody is wrong for focusing on the agent or on the social/political structures, but they are wrong for dismissing the arguments of others who focus on the other part of the problem.

I do think that focusing on "evil" is a problematic approach because it takes us away from agents and structures.  There can be "evil" within individuals and within institutions, but we need to explain why there is variance--some people and institutions are more "evil" than others--as the variance provides us with leverage so we can figure out causes and conditions that facilitate the bad stuff and then develop ways to mitigate/reduce.

Why focus on agents?  Because lots of people exist within a set of norms (what is appropriate behavior, what is expected behavior) and institutions and yet few pick up a gun and shoot a bunch of people (too many, but still not only a few).

Why focus on social structures and political institutions?  Because an individual who is somehow messed up may act out in any number of ways.  Why target African-Americans?  Something in this guy's social scene/growing up/whatever helped direct the blame for his circumstances towards African-Americans.  Why was he able to kill so many people so quickly?  He lives in a society where access to guns is easy and where the focus is on gun rights and not on gun responsibility.

Obviously, there is more to both sides of this problem, and that is where social science comes in--figuring out as much of this as possible not so that we can eliminate evil (even I am not that naive or optimistic) but so that we can reduce the harm caused by these agents and these structures.

And to both illustrate the agent-structure problem and to have something pretty to offset the ugliness of racial divisions, I present a picture from the aforementioned bike ride. 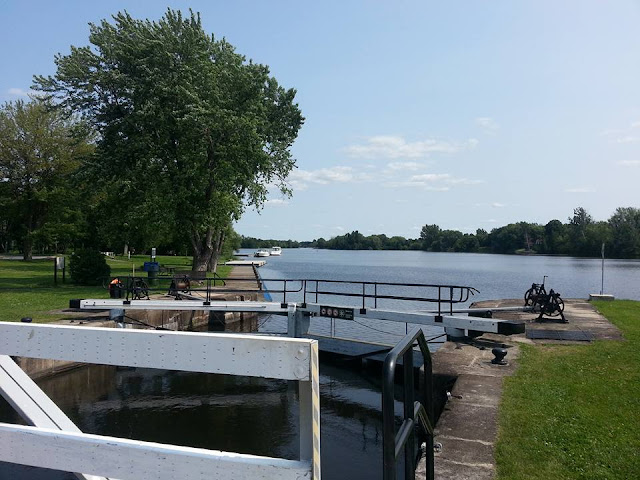 Posted by Steve Saideman at 5:06 PM