If Only It Were Made of Ice

Alas, the wall that some 40% of Americans want would be of bricks and mortar.  Takes the Game of Thrones joy out of it.

What to make of this survey result?  The actual question is thus:

Okey, dokey.  The result of 41% agree is the same as for the following question:

There should be a brick-and-mortar wall between the U.S. and Mexico

Let's take the second one first.  Is 41% high or low?  Given all of the rabble-rousing and the actual existence of some walls along the border (see the Volleyball picture to the right), 41% is probably low.  After all, the loudest candidate for higher office is making this one of the very few distinct policy proposals, and this has led to an outbidding process where the rest of the GOP candidates have promised to stop the hordes of Mexicans with walls, drones, frickin' laser beams, etc.

Ok, with that context, what about the Canadian question?  It seems like most of the people who want a wall with Mexico want one with Canada, perhaps because it makes them sound fairer and less racist?  What would be the survey result if the question was asked without any reference to Mexico:


Should the US build a wall between Canada and the U.S.? 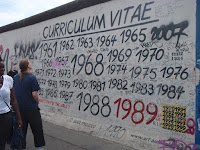 My guess is that the result would be somewhere around 20% since one can get about that much support for any wacky policy proposal.  Some folks will always say yes because they think the country should be surrounded by walls or because they have family in industries that would benefit from the wall-building or because they would like the acreage of potential graffiti space (see East Berlin Gallery to the right).

And some Americans may actually be threatened by Canada in some way.  What would these Americans want to keep out?
What am I missing?

The key point, of course, is that this survey question is mostly .... air. Posted by Steve Saideman at 9:44 AM