Peace, Order and Good Government: Not!

This past week I was reviewing the copy-edits for my next book: Adapting in the Dust.  I realized that my criticism of the Harper stances on the war might seem naive.  That my basic take is that he adapted, unlike some other actors, but in ways that were good for him and bad for the country and the war. 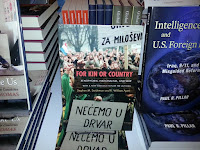 This is not surprising to me as it is the basic theme of For Kin or Country (the revised/paperback edition will be on sale shortly and looked spiffy in the APSA book room):

The stance in question--running away from the war--made sense for domestic politics as the war was not popular, and he ultimately gained a majority in the Parliament.  But it was bad for the country as it helped to confuse the public and undermine public support for the effort.

And I was struck while reading the copy-edits about the mantra in the title that I had to memorize for the Canadian Citizenship test: peace, order and good government.  This was not good government.  Again, not surprising since the focus of politicians and parties is in winning office, right?  Well, not entirely.  As I was reminded last May in Amsterdam at a conference, and as Phil and I wrote in the latest version of our paper, politicians can focus on winning office or seeking to promote policies.  That is, they can be vote seeking or policy seeking or both.

These can converge, and do, of course (balancing the budget for Harper, I think).  But when they diverge, politicians have to figure out their priorities.  Since they are always running scared (never secure in their political position), they may focus on vote-getting.  But my semi-naive view is that once you win office, you actually need to think about what is good policy and sometimes focus on that, even if it is dangerous for vote getting.  The relentless pursuit of office should at some point relent a bit once one is in office.  Once you have control of the government, maybe focus a bit on good government?

Which is why I am always frustrated by the Harper government's efforts to obscure rather than be transparent, to undermine rather than to build.  After all, with great power comes great responsibility. In this case, being responsible means focusing a smidge on good government and not just on vote seeking.  Ok, maybe I am hopelessly naive.