Pet Peeve Du Jour: Organizations and Missions are Not the Same Thing

A typical move up here in Canada, especially on the left and center-left, is that a writer or speaker will make some claim about UN peacekeeping and pose that as an alternative to NATO or whatever.  The problem is that the UN is not the only peacekeeping organization in the world AND, alas, NATO, for instance, has done some peacekeeping.


Oh, and we can also get into peace enforcement as the UN failed to stop the Bosnian war, but NATO did once the US got serious, and NATO, not the UN, intervened in Kosovo.


So, when people say we need more peacekeeping, they are often implying more UN, less NATO and definitely when they say that we used to do peacekeeping with blue hats and all that but none since, ignoring Canadian contributions to NATO peacekeeping in Bosnia (1995-2004) and Kosovo (the mission continues, but Canada's contribution was always light there).

To be sure,  there is a reason why Canada became less enthusiastic about UN PKO's: those missions often had confusing mandates, limited capabilities, unreliable partners, and lousy outcomes.  Afghanistan looks bad in the rear view mirror, but when the Canadians asked for help, they always got it from the US, the British, and others (despite the alone in Kandahar mythology).  How about Rwanda?  UN not so good there with inadequate equipment, partners who pulled out immediately and on and on. 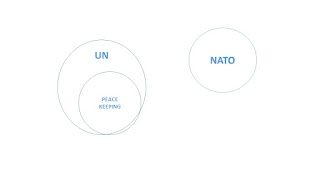 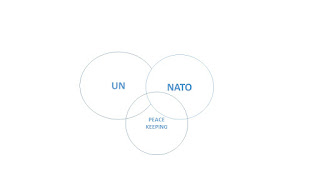 So, that is my rant for the morning--that organizations and missions are not identical.  Organizations do more than one thing, and missions can be done by multiple organizations.  The UN could engage in counter-insurgency if it could get the votes.  It did engage in a conventional war when the Soviets were silly enough to not be in the room (Korean War).

Nostalgia for blue helmets and handing out candy* to kids should not blind one about what the UN and NATO can and have done.

* Candy bars is an American term, apparently, not a Canadian one--thanks to my copy-editor