Profiles in Cowardice and Ethnic Outbidding

I knew I could count on Brian McFadden: 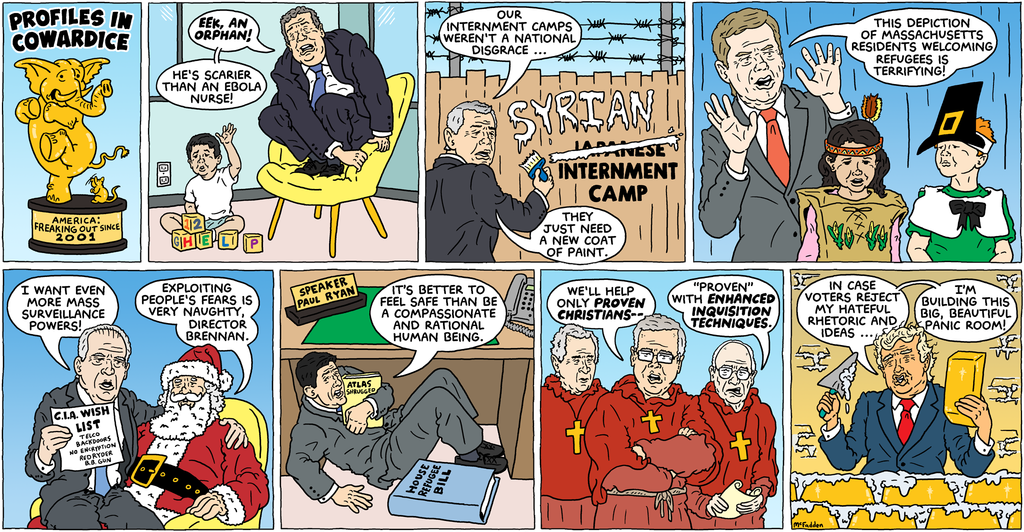 Yes, cowards.  Craven.  Pandering to the worst instincts, selling out one's values.  I tweeted the other day, after the House vote, that I have never felt a more visceral disgust for our politicians than at that moment.

The question is: why?  GW Bush was awful in many ways, but he was careful to avoid demonizing Muslims in the aftermath of 9/11.  There are a lot of reasons why the politicians of 2015 are chock full of panic, but focusing on the Presidential race, I have a few clues.

First, because the field is so splintered, the competition is particularly intense.  The candidates need to do much just to get enough attention to get on the debate stage.  Which is an environment ripe for outbidding.  Ethnic outbidding refers to the process by which politicians compete with each other to be the best defender of an ethnic group by making promises to exclude/oppress/alienate a minority.  The literature on this is pretty vast, but the go-to source on this is Donald Horowitz's Ethnic Groups in Conflict.

Second, the field includes so many amateur politicians (Trump, Carson, Fiorina) and relatively inexperienced ones (Rubio, Cruz. Paul) that they cannot point to substantive records nor do they have the experience to able to articulate anything other than the simplest pandering stances.  So, when they face the intense competitive pressure of a race with over 12 candidates, they resort the easiest, laziest, least brave stances.  They resort to fear and anger.

Third, the media is being drawn to the most extreme stances because they are under great pressure to survive in the 21st century.  It is no longer about fact checking but about tweeting immediately and filling up the 24 hours of TV on CNN, Fox and the rest.  Responsible journalism could put this stuff into context, but even when they call out Trump for being wrong/a liar/simply awful, they (Stephanopolous this morning) just point out the lie/distortion/whatever and then "move on".

Of course, money matters as well, but I think the focus lately has not been so much on sucking up directly to the Koch brothers and their ilk but on trying to stay on tv and on top of the polls so that the money folks will keep betting on the candidate.

Anyhow, I keep thinking we live in the darkest time-line, but I know it can be worse.  I am also pretty sure that Hillary Rodham Clinton will beat any of these goons, but in the meantime, these goons are inspiring violence.  And that, alas, is nothing new to those who understand ethnic outbidding.
Posted by Steve Saideman at 11:31 AM