Yesterday was a pretty amazing day.  First, the local CBC morning radio program talked to me about my book.  The interview was really good as the host, Hallie, did a nice job of building on the pre-interview but in a very natural way.  I was able to talk about the book and link it to recent events. 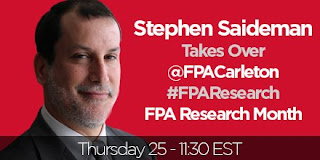 Then I did the @FPAtakeover tweetup. The second event in the Steve promota-palooza involved getting access to the @FPACarleton twitter account--their idea, not mine--and respond to questions.  I storified it (see the link).  The topics ranged from the book to Iraq/Syria/ISIS to how many Tim Horton's are on Carleton's campus (5).  It seemed to go well and the FPA folks seemed to be delighted. 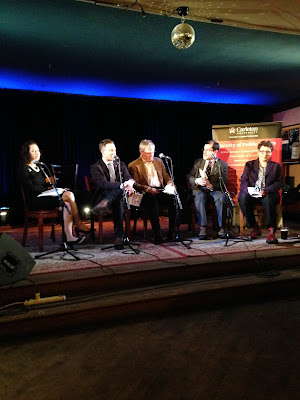 And then I had the Author Meets Readers book launch at Irene's pub.  This was very well attended. Karen Schwartz, the Associate Dean of FPA, mc'ed.  The participants were myself, Phil Lagassé of the U of Ottawa, retired LTG Stu Beare, and Ambassador Elissa Golberg.  Stu asked the audience about their ties to the mission, and more than half knew someone who lost "life or limb."  That created a very moving context for the conversation.  Phil took me to task for expecting too much from our politicians, who are only responding to the incentives--that we the public are to blame ultimately.  Elissa criticized the book for repeating some myths about the civilian side of things.  I was quite grateful to all three for taking the book seriously and coming to the event armed with their perspectives.

I am grateful to the FPA folks for setting up the latter two events and the media relations Carleton for setting up the first event as well as some other stuff.  I said during my intro that FPA at Carleton has given me far more support, encouragement, recognition and assistance than any other Dean's office in my career, and it is not even close.

It was a stimulating day, and it was great to get folks engaged in discussions about the stuff that I have been studying and writing about for years.  Indeed, while I do not intend on writing another book on Afghanistan (two is enough), I may end up doing some more research to fill in some holes.

Thanks to one and all for a great day!

Posted by Steve Saideman at 2:26 PM