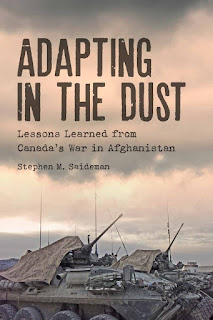 Facebook reminded me of some interesting timing--that today is not just the Ottawa book launch of Adapting in the Dust but also the third anniversary of the rejection of my access to information request regarding the lessons learned effort.

The government engaged in a serious effort to figure out what we can learn from the Afghanistan campaign, and then buried it.  Why?  Because learning lessons means admitting mistakes and the previous government would not dare do that.  Yes, the rejection cited advice to cabinet and embarrassing allies, but the Info Commissioner's website makes it clear that one can appeal such grounds.  Alas, the appeal is three year's old.  Perhaps the new government will let not just me but the rest of the government see this document.  I just need to find my old rejection letter before I call up the appeals folks.

Anyhow, this rejection helped to motivate me to write the new book, as I decided that we needed to figure out the lessons and share them if the government was too cowardly to do so.


Hopefully, folks won't mind going through the slush to Irene's Pub at 5:30 for the Author Meets Reader panel--Phil Lagassé (U of Ottawa), Stu Beare (former commander of all Canadian operations) and Elissa Golberg (former Representative of Canada in Kandahar).

Today's song, despite the snow/rain/slush is:

Posted by Steve Saideman at 8:56 AM