Other than much challenging weather on the way out of Ottawa, the trip went quite well.  I had two great but very different days of skiing and had interesting conversations with two very different audiences.

The crowd at Laval were mostly graduate students and faculty, while the audience at Bishop's was mostly undergrads with a few faculty sprinkled in.  Both groups asked sharp questions.  The latter group had a big advantage: the bookstore had copies of my book and brought a bunch to sell! 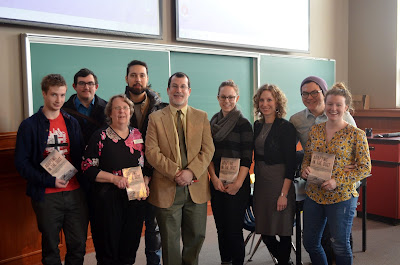 At both stops, I got to spend time with my former PhD students, which I discussed here.

The ski days were different.  Massif had a thin layer of snow over a hard surface, which meant very fast runs.  Jay Peak, where I have skied a few times but not very recently, had much ice before yesterday but then got a bunch of snow the night before and then much precipitation throughout the day.  The top was closed due to winds, which was very Jay-ish.  Still plenty of excellent blue cruising terrain which much fresh snow.  The challenge was not speed, but sight--that it alternated between snow, freezing rain and maybe some rain.  So, I looked like this: 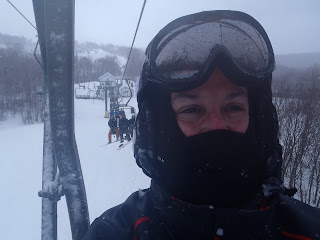 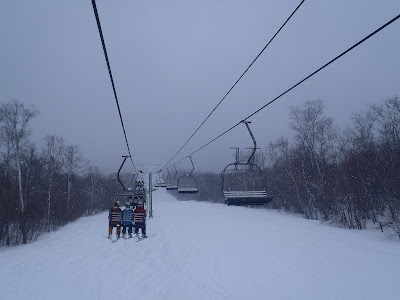 Oh, and Jay had the more familiar food (unlike Massif): egg/bacon bagel sandwiches, cinnamon rolls, burgers and chocolate milk.  The big shock at Jay was the development of the base area--completely unrecognizable from the road as they built hotels/restaurants/indoor waterpark around the old cafeteria/base area.

The book tour continues this week with my taking over the @fpacarleton twitter feed Thursday morning (Feb 25th) at 11:30 and the Author Meets Readers event at Irene's Pub at 5:30 on the same day.  A week later, I will have multiple talks in Vancouver.  After that, we shall see but I expect to make it to Toronto and Calgary at some point.

Posted by Steve Saideman at 5:32 PM