Better To Be Lucky, Whistler Edition

Whistler got a dump of snow last night.  Woot!  Well, more like wow and wooooo.  As in, wooooo, I am exhausted.  The top of the mountain was closed for the first part of the day due to winds, but there was plenty of terrain to enjoy.

The problem?  This was not the fluffy soft snow that one can just go through easily, but the stuff that is delightful but more challenging to ski through, and I have little experience with it.  So, I ended up focusing the morning on the green runs that had been groomed.  Whistler's easy runs were plenty terrific--most would be blue cruisers anywhere else.

I did start early with the Fresh Tracks program.  Buy a $20 pass, get there really early and one's get to the middle of the mountain before it officially opens.  And it includes a buffet breakfast (with very good french toast!).  Worth it (especially since I seem to be sleeping on east coast time).  Got some runs in before things got busy.

Then the liftlines started getting pretty long, so it was good news when a guy on line with me (an Irish guy, which made him an exception to the average skier seeming to be Australian) told me that the upper mountain was opening up.  He said that the Harmony lift was going to be opening soon, but not to tell anyone so that we could beat the rush.  Well, when I got there, it turned out that everyone else had heard the same whisper, including this bird 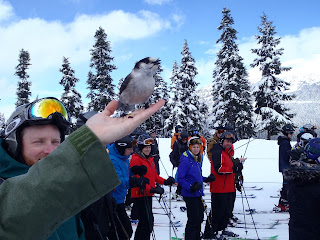 So, it was a long wait, but it was worth it: 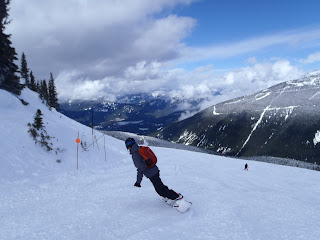 The scenery up top was fanstastic, including an inuksuk for selfies: 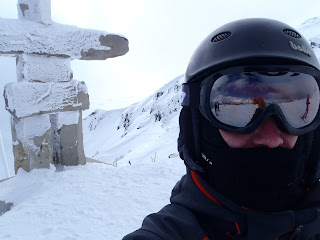 I had skied this ridge two years ago when I had two hours to ski the entire place.  I had visited here with my daughter when she was checking out UBC.  But she had leg cramps on the first run, so I asked her to eat and shop for two hours while I crammed in as much as I could.  That was the best two hours of skiing in my life--short lift lines, Whistler was in great shape.  But I felt much guilt and regret--guilt that my daughter was waiting for me and regret that she could not join me and that we could not ski more of the mountain.  I was determined to come back.

And so, today I had perhaps the best day of skiing in my life as I had no guilt, a smidge of regret--that my daughter could not join me, and a heap of fun.  Even if I decided on one last run on the other ridge on the other side--which exhausted me since it was not groomed--steep and chock full of deep snow.  I fell once and was pretty much buried.  Hard to get leverage to get back up when one is in a pit of snow.  But a fun challenge and a great time overall.

I am, indeed, quite lucky.  And I am determined come back so that I can do the top side of Blackcomb on a non-windy day.  Perhaps the next book tour?