The basic idea, stolen from social psychology (and applied to ethnic conflict by Donald Horowitz and others), is that we end up investing our self-esteem in any group in which we are a member.  Today has been a strange day because, well, I am a United Frequent Flyer.

I started out with Continental since Cleveland was a hub and I went to school in Ohio.  As the miles accumulated there and at United due to various flights of old, I benefited when the two merged even if the merger was craptastic for customer service.  And then I moved to Canada, where I had a choice: stick with United since Air Canada was a partner in Star Alliance or move to Air Canada. I heard bad things about AC's ticketing when using miles, so I stuck with United.  The past few years of amazing research and other opportunities means I have good status and heaps of miles.  Changing would be problematic--which is by design. 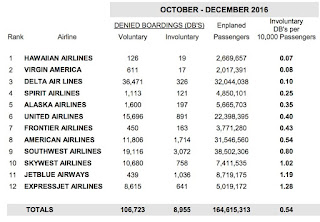 I have always been aware that United is not a great airline, but was ok with it anyway since my Delta friends hate Delta and my American friends hate American, and, oops, we are plum near out of US airlines.


And then the events of this weekend happened--a passenger was literally dragged out kicking and screaming because the United folks screwed up and then couldn't convince anyone to change plans for $800 and a free hotel stay.  Wow.

So, how do I feel? I feel bad for the guy, I feel outraged, and I feel bad.  That the team I associated myself with turns out to suck worse than I thought.  Hurts my self-esteem.  If I continue to fly with United (and I will since I have much sunk cost--miles and status [yes, I am aware of sunk cost fallacy]), will I feel kind of bad as I am hanging out with the loser airline that literally hurts his passengers?  Yep.

At least I can still laugh:


We take you live to the united airlines press conference, already in progress... pic.twitter.com/B5x6Pz4ESo
— THE ULTIMATE WIGGER (@ultimatewigger) April 10, 2017

Posted by Steve Saideman at 5:12 PM