Now We Are Talking Attacks on Academic Freedom 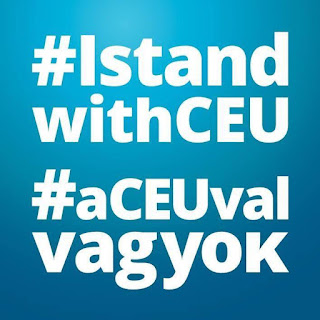 The only real surprise about Viktor Orban's attack on Central European University is that it has taken him this long.  Orban has been creeping/dragging Hungary towards autocracy for years now, way ahead of Trump and way ahead of Erdogan.  Central European University was founded and funded by George Soros, the bete noire and then some of all anti-semitic conspiracy theories.  So, opposing CEU plays to that crowd, but the university is a threat to Orban more because it is where folks engage in and train critical thinking. Just as Erdogan targeted Turkey's universities in a big way, Orban is targeting the most prominent university in Hungary.

The legislation aimed against CEU is being opposed around the world.  I signed this letter, although my name is not on the list for some reason. The APSA has put out a statement, as has the ASN.  Other folks are also making statements.  However, I am not optimistic as Orban has a majority in his legislature, and having the world arrayed against him is probably a bonus for him.  Justifies his autocracy, his fear-mongering.  The real threat to Hungary is the EU, but it is hard for that institution to sanction members.  My friends who understand the EU can explain better than I can, but neither NATO nor the EU were built in ways to punish members.  Conditionality--setting conditions for good behavior--only applies to applicants, if at all.  So, while I have not given up all hope, I will keep an eye out for jobs for my friends who work there, because, I am afraid, they are going to need them.
Posted by Steve Saideman at 11:26 AM