The Adults Meme Should Die, Killed by Fire ... Or Dumb Tweets

Lots of stuff written about how the adults are now in charge of US foreign policy.  I scoffed and I scoff again.  Why?  First, because Trump is still at the top, and he remains a lazy, ignorant, and awful human being.  Expect him to listen to reason?  Only when the last person to talk to him is reasonable and even then?  Not so sure.  That Trump congratulated Erdogan on his seizure of power today is appalling and shows that even if his NSC process has been fixed, the output is still rotten to the core.

Second, how about our reasonable VP?  I had argued that Pence would better than Trump because at least he would not want to start any wars willy nilly.  Well, after his visit to South Korea and subsequent tweets, I recant.

But despite the strong economic ties between the U.S & SK, we have to be honest about where our trade relationship falls short. #VPinASIA
— Vice President Pence (@VP) April 18, 2017

Most concerning is the fact that the U.S’ trade deficit with South Korea has more than doubled since KORUS came into effect. #VPinASIA
— Vice President Pence (@VP) April 18, 2017

How can you try to reassure a country that you are 100% behind them and then in the next viritual breath whine about a trade relationship that has actually worked out just fine for the two countries?  I don't care that Pence is doing Trump's bidding--he could have done this in a way that is not so thoroughly insulting.  So, strike Pence from the cast of the adults.

Third, so the American "armada" that was supposed to head to the Sea of Japan didn't?  Fine bluff, huh?  Well, it would be ok if it were not part of a larger pattern of making threats have nothing behind them.  No, I don't want this administration to follow through its threats, I just don't want it to make threats that are blatantly empty.  We are soon going to get tests of all the scholarly work out there on credibility and resolve, and it is unlikely to be pretty.  China referring to the US as a paper tiger is NOT GOOD.  It may lead China to over-step and then Trump might overreact.

So, please, if you see anyone, hear anyone, read anyone saying that the adults are in charge and we should not be worried, either yell at them or walk away, but DO NOT BELIEVE THEM.  We have no real evidence that this administration is mature in anyway.  It might have some reasonable people running about, but the messages that are being sent are dangerous ones, that the welcoming of autocracy is awful, the insulting of allies is so unnecessary and so damaging (our friends have domestic politics and pride, really), and that the reckless use of threats is going to get people killed. 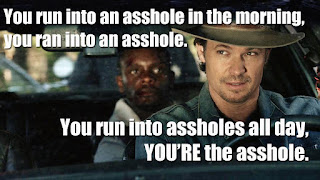 Yes, it could be worse--the US could have started new wars rather than just escalating in Afghanistan, Yemen, Syria, and Somalia.  But it has been less than a hundred days, and the inferences we can draw about the causes of US foreign policy and its likely direction are downright scary.  Adults? My ass.