When Perception is Reality

This figure being circulated by twitter should not surprise:
Who Germans consider trustworthy: 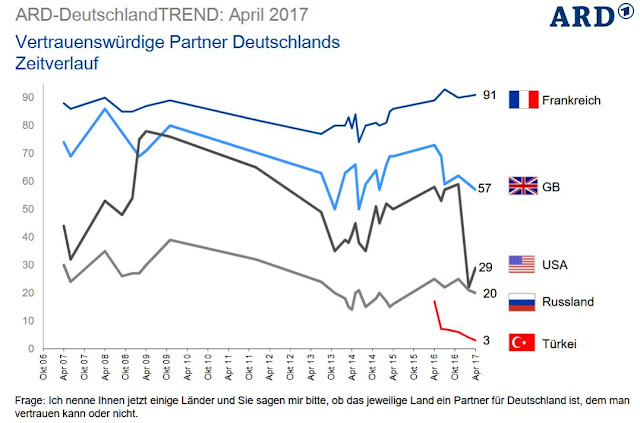 Note the impact of elections: way up when Obama is elected, way down when Trump is elected and a bit shaky when Snowden revealed that the US spied on Merkel.  Looks like the Germans have pretty clear grasp of things.  Is Trump reliable?  No, he's an uncertainty engine.  He views Germany not as a friend but as a competitor and as a currency manipulator (despite not really having its own currency).  Will Trump stand by Europe if Russia were to engage in aggression (well, more aggression)?  Maybe, but maybe not.  And since Trump also lies about everything, why should there be any trust?

I am sure Germany is not alone in this.  Where are the Republicans who complained that Obama hurt the US reputation in the world (which was precisely backwards given how opinion of the US bounced back after GWB's Iraq fiasco)?  The right picture for that is: