One Day of Peace in South Korea

Now that we have peace in our time,* South Korea is safe for me to do research.  Actually, I am here to understand South Korea's civil-military relations as part of the Dave/Phil/Steve project, and I am only here this year because of the impeachment fairy's efforts last year.

Because jet lag is a thing, I tend to fly in a day or two early to get some rest so that I don't fall asleep on the couch of someone I am meeting (I learned that the hard way way back in my Joint Staff days).  So, I spent today walking around the part of Seoul closest to me.  As it turns out, this is where a massive palace complex is: Gyeonbokgung Palace.

Even before I got there, I had seen signs about past Japanese perfidy, so, no, I don't have much hope for South Korea and Japan to move beyond their pasts. 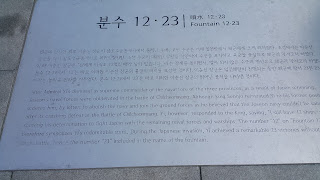 Pretty much most of the signs next to various buildings indicated that the Japanese destroyed them at some point.  Maybe it is my confirmation bias, but I didn't see quite this much this kind of signage in Tokyo.  Also, Tokyo had more fires and earthquakes whereas Seoul has far more occupation.

I also could not help but notice the ubituity of shelter signs.  While most were subway entrances, this one is of a small museum. 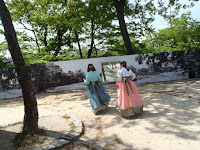 Wearing costumes while touring is a thing not just in Japan but here as well.  I saw both many people wearing traditional garb while walking around this palace complex and later many stores that rent them out.   I don't think I have seen many people in North America or Europe do anything like this.

Here's something I don't remember seeing in Japan: food that comes delivered in mini-toilets.  No thanks.

The trip over was uneventful except for passing through Shanghai airport--I had to go through customs twice--as an arrival and as a departure.  With security lines in between, it was most annoying.  I had plenty of time between planes, but not fun.  I did binge Brockmire on the flight over--Hank Azaria plays a wildly inappropriate baseball announcer on his last chance--announcing a minor minor league team called the Frackers.  I probably woke some people up with my laughter, as it was a very good time.

Speaking of pop culture, Mrs. Spew and I saw Infinity War the night before I left.  I probably won't blog about it until I see it a second time--just too much stuff happened and much need to process.

Anyhow, I am tired and sleepy, after a very long flight and after much walking around, so here's some of the better shots from today 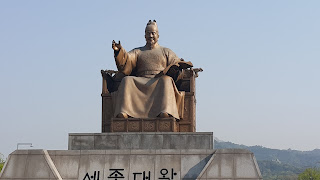 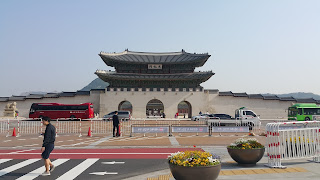 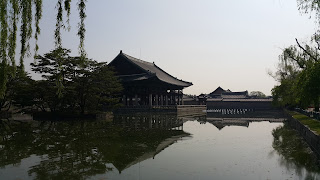 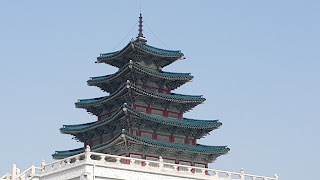 Posted by Steve Saideman at 7:54 AM

After touring a few temples and palaces in Seoul, my observation was that many of these sites seemed to have a sign that had some variant of "This historic site has gone X years without being burned by Japan."