As usual, my daughter and I ventured to the Mall during winterfest.  It used to be all about the Natural History Museum.  Over time, her interests changed, so various art museums and some history museums became more of our focus.  This year, we hit the Hirshorn contemporary art museum and the National Museum of the American Indian.  Oh, and we walked up to the capitol. 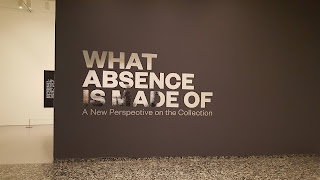 The Hirshorn had some funky stuff, including an entire exhibit dedicated to absence.  It involved a bunch of stuff they had in their collection that they could display at once to suggest how one thinks and feels about absence.


I had never been to the National Museum of the American Indian.  I was curious about how it covered stuff because, well, the history is pretty damned ugly.  My daughter was struck by the paradox that this building is an institution that is run, more or less, by the same government that continues to oppress Native Americans (see the pipeline stuff). 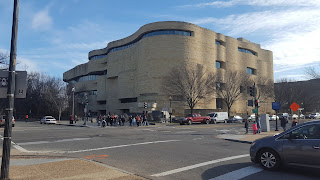 The building was beautiful.  The displays did convey much of the horror and betrayal that is the history of Native Americans encountering the Europeans and then the United States.  Was it sufficiently critical of the US?  Something my daughter and I discussed.  We agreed that having the gift shop next to the Trail of Tears display was off-putting.


We did get a chance to celebrate the diversity of the US via food trucks: Twas a South American sandwich of corn pancakes with chicken in between. Yum. 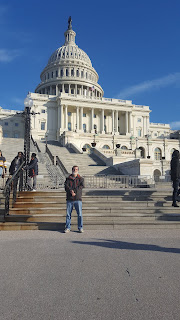 And then we got up close to the capitol:

As always, whenever visiting places like this, I marvel at the diversity of the crowds.  Obviously, the tourists include folks from abroad, but it is a nice reminder that the US is a diverse place, that the people's house represents all of us.  Even if there are white supremacists inside this building and the one just off the Mall.

I hope you had a great winterfest.  I certainly did, as I got a heap of time with my daughter and my wife's family.  I hope that 2019 is a very happy new year for you and yours.
Posted by Steve Saideman at 10:24 PM