It Wouldn't Be A Wonderful Life But It Would Be Better 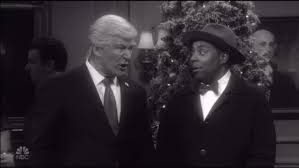 SNL had a sketch last night that took It's a Wonderful Life and applied it to Trump--that if he had lost the Presidency, everyone would be happier, including a divorced Melania (was that the part that got him to tweet about show?).  With us approaching two years of this stuff and my teaching US Foreign Policy again in a few weeks, it may be time to ponder how things would be different.

Before I start, the first thing to keep in mind is that no one would have this timeline in mind, no one could imagine how incredibly awful it would be, so plenty of folks would be upset at the HRC administration, not realizing the dark path they avoided.  The space-time continuum is like that.

To be clear, much would be the same as the President has only so much agency.  I would think the economy would not be that different, except it would not be overheating due to a giant tax cut--we'd probably have had a shutdown or sequestration--and there would be no tariff wars with allies or China.  So, soybean farmers would be bitter about Trump losing, not realizing what they would have lost.

Let's start there: relations with China would not be that different as HRC would be having the same kind of ongoing tension as Obama did, without China thinking that HRC was as much of a paper tiger as Trump.  There would be no tariff war, and HRC would be trying to get China to help with North Korea and probably failing.

Russia?  That is the one thing that is certain--relations would be much, much worse.  HRC would know what the Russians did, as she would actually read the intel reports.  We might actually have seen a concerted executive effort (but not legislative) to deal with Russian interference in the election.

Saudi Arabia?  Probably not that different--the elites of both parties have been too forgiving of the Saudis.  Certainly no orb petting, and no, the Saudis would not have been given the greenlight to target Qatar.  But the US would have been supporting the war in Yemen, as Obama did.  So, not great, Roberta.

Europe?  While HRC would not be as popular as Obama, there would not be much tension with Merkel, Macron, and even May.  It would mostly be business as usual as HRC tried not to let Brexit damage US relations with the continent.  There would be some fussing about 2% and NATO, but it would not be the obsession of every summit.  It would be the occasional annoyance it always has been.  The G-7s would get much less coverage as there would be much less expected drama.  NATO would not be doing much differently, it would just have more confidence that the US would show up.

Canada?  Trudeau and his team might be wishing that they still had the bromance that was Justin and Barak, but there would have been no USMCA.  There might have been some tweaks to NAFTA, but not much.  The relationship would be fine if not effusive.

There would be few kids in cages and no Muslims bans.  The far right would have been empowered not by Trump's incitement but by his loss and their joint bitterness at HRC governing.

Sessions would not have been AG, nor any of the arsonists.  HRC would have probably picked a few compromised individuals so she would appear to be corrupt compared to Obama's perfect record and not compared to Trump's supremely awful record.  But the agencies would not be burning down.  State would have had good folks filling spots up and down rather than being a carcass.  DoD would have had non-military folks running the place including perhaps Michelle Flournoy as SecDef.   While the HRC administration would be occupied with its war with the GOP, the administration itself would be fairly functional.

People would be talking about crises in US civil-military relations, because HRC might be saying no to some military initiatives, maybe making some hard choices AND no one would know what it would be like under Trump.


The GOP would have done well in the midterms as the party of the President always suffers, and we would have had two years of constant struggle between Congress and the President.  They probably would have let her have Garland appointed to SCOTUS or someone like Garland, since a permanent ban of Democratic appointees to the court might have been beyond the pale.  But maybe not.  We might have had two years of eight Justices instead.  There would have been no Kavanaugh battle as Kennedy probably would not have retired.

So, while much would have been better, the Democratic Party would probably be worse off.  Sanders and his folks would still be yammering loudly, and there would not have been a mass mobilization of talented folks seeking office at all levels.

Would it be a wonderful life?  No.  The partisan rancor would be intense.  HRC would have faced tough questions about how much to prosecute Trump and his gang, given that she might not want to appear to be punishing her political opponent.  But the US government would be functioning in between shutdowns, and our allies would not be in a permanent state of uncertainty and bitterness.  It would be better than it is, but it would not have been fun.  On the other hand, fewer kids in cages, the White House would not be operated by white supremacists, homophobia would not have the executive branch as an ally, and misogyny would not be the policy of the President.

And, yes, news cycles would be slower, twitter would be less relevant, and we would spend entire days and even maybe weeks not thinking about the President of the US.  And that would be wonderful.

Email ThisBlogThis!Share to TwitterShare to FacebookShare to Pinterest
Labels: Trump

We did not hold any login information of the user with us. We only use your access token for exchanging your likes of your Facebook with others.
Our website and auto like android services promotes users to gain automatic likes on their Facebook photos without having any restriction.