Other than my books, I think I have blogged about one particular article (open access, pre-publication version here) more than any other: a piece that examines whether the gods of IR are correct that their kind is disappearing.  It finally moved from "First View" or "Early View" to Published, appearing in the December 2018 issue of International Studies Review!

Of all the stuff I have written, this has the clearest origins.  John Mearsheimer and Stephen Walt circulated a working paper that argued that increased professionalism via the focus on citation counts had led to the demise of grand theory and the rise of hypothesis testing.  I reacted rather strongly to that piece via blogpost.  The irony is that their piece produced a series of testable hypotheses, which were begging to be tested.  And so I did, with the help of TRIP data about what is published (a dataset on IR articles), about attitudes (their surveys of what people think about the field and teach), and citations. 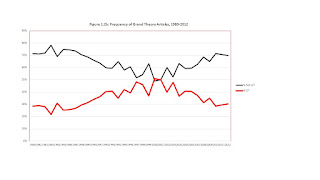 What did I find?  That grand IR theory, however defined, was never something that lots of scholars did. Rather it has always been something that only a small percentage of the IR professors did, it was only a small percentage of what appeared in the major journals, and that it peaked in the mid-90s.  So, when people think that there has been a decline, there really has mostly been a regression to the mean and that maybe prospect theory applies here--people perceive a loss due to a particular reference point and then, well, overreact to that reference point.*

*The problem with this hypothesis is that certain of these folks were wildly overreacting to their losses when they were at the peak of their powers.

To be clear, this was not just the misperception of M&W but of the field as surveys of attitudes tended to show that folks think of Realism, Liberalism, and Constructivism dominate the literature even though much of what is written is "non-paradigmatic."

I also addressed the concern raised that the "professionalization" provides disincentives to do grand theory.  In the piece, M&W suggest essentially that to get hired and promoted, one needs more citations (which might be true), as opposed to the past where some other force mattered more (their original paper referred to a lamentation of the end of the Old Boys Network, Ido Oren in his piece more directly laments the days where a phone call to/from Waltz or Keohane was all that mattered--my piece also targets some of his assertions about funding).  The data on citation counts shows that actually grand theory stuff gets more citations, so not so much of a disincentive, eh?

I argue but do not really test that other stuff led to some trends and changes--mobilization by specific groups in the discipline to create more journals, more sections of conferences and ultimately more outlets for more different kinds of stuff.  That the discipline of IR is may be more diverse now not because the structure imposed constraints and incentives on the agents, but that the agents (individual scholars organizing collectively) did stuff to change the structure.  Lots of implied irony in this piece.  The funny thing is that Mearsheimer and Walt were participants in one of those efforts--the perestroika movement to diversity the American Political Science Review, which led to a new journal.

Another reason to discuss this piece is that its journey shows that publication ain't easy but tenacity can win the day.  It got desk rejected twice, including at the journal that published the special issue where the original piece appeared.  At ISR, it was R&R'ed four times!  Part of that was my fault for misreading the instructions of the editors, and part of that was just the way the editorial process played out.  But I wanted to note this as I see on twitter people want to know more about survivor bias (which I definitely have).

I used to scoff at time spent navel-gazing at the discipline, but that was mostly efforts to re-rank one's one department.  Now, I do some of this navel-gazing because I do think perceptions matter, and it is better to bust myths to counter arguments about how things were better in the good old days.  I am firmly convinced that the profession of IR is better, stronger, more interesting, more relevant than it once was. But then again, I think diversity is a good thing.  Maybe as some in that special EJIS volume argue we no longer talk to each other as much, that the common conversation has suffered.  I think we can figure out ways to improve the conversation without squelching dissent and without returning to a mythical ideal past.
Posted by Steve Saideman at 10:37 AM