Gender Violence and the CAF

I went to an event today on Gender Violence and the Canadian Armed Forces.  Why?  Because it was co-run by two organizations--Women in International Security Canada and the Conference of Defence Associations Institute--that are key partners in the Canadian Defence and Security Network and because personnel issues are one of five key themes that the CDSN will focus on (if we manage to get funding).  Going to events like this allow me to catch up a bit with the stuff in an area that is relevant but mostly adjacent to my research.  That is, stuff I am interested in, but don't have time to read.  Like the IUS-Canada conference in October (another partner), I am struck by the intelligence of the folks in the room AND the challenge facing the CAF, DND and pretty much everyone else.

I was also struck by how few men were there.  A room of about 30 folks had four men plus one of the organizers.  A male speaker dropped out due to illness.  My tweeting of this led to much conversing online.  Yeah, men tend to see gender as a woman's issue for which they have little time.  However, toxic masculinity is toxic for men, too, as the raw numbers show more men being sexually assaulted in the CAF than women.  That might be an artifact of the percentages--that there are far more men than women in the military--but the reality is that men pay a price for this.  Also, much sexual harassment may be aimed not so much at the immediate target--a woman--but towards the other men, that men prove their manliness to other men by picking on women.

The first speaker was Dr. Manon Leblanc, a scientist at the Director General Military Personnel Research and Analysis (yes, another CDSN partner).  Her focus was on the effort to gather data--what the various surveys caught, what they missed, and the next wave of research.  The findings were largely unsurprising: LGB face more discrimination/assault/harassment (no T in this due to small number of trans gender personnel filling out the surveys).  More work needs to address the behavior of bystanders and more interviews with the targets of abuse.  There was some Q&A and discussion about the best way to describe those who face sexual misconduct--victim, survivor, target, affected personnel.  Which led to a larger conversation of how much of the work talks past each other due to different jargon.  People preferred not to use victim as that is problematic, with target fitting in with military language better.

The next speaker was Lieutenant Commander (retired) Rosemary Park, Director of Servicewomen's Salute. This is perhaps the only organization that represents female veterans as a group in Canada.  She pointed out that we have had repeated crises and not much apparent improvement.  That there has been no little change in the organizational culture.  She did refer to a new documentary coming out next year, Invisible Force, that presents the women who have come out and reported their experiences as targets of sexual assault. (here's the trailer) I will definitely be considering that doc for my Civ-Mil class next fall. 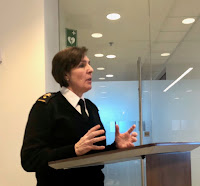 After lunch, which was nicely designed to facilitate some good follow-up discussions/networking, Commodore Rebecca Patterson, Director-General of the CAF Strategic Response Team-Sexual Misconduct discussed her job, her office and her background.  I met her during lunch--she is quite impressive.  She articulated quite well the challenge facing her and what the role of the chain of command is in all of this.  She indicated that they welcomed the Auditor Gener  al's report.  One of the key problems is that there are services for those harmed by se

xual misconduct, but people don't know how to access them--that there are still too many barriers and silos.  She said that the CAF will have a strategic plan in October 2019.  This might seem slow since this stuff got priority after the Deschamps Report in 2015, but she did hit one of my favorite notes--that we need to focus on outcomes, not just outputs.

The last speaker, Dr. Chantal Ruel of the Sexual Misconduct Response Centre, presented the new efforts--more bilingual staff available 24/7.  Many of the calls they receive are from officers asking how to handle complaints they receive.  The hard part is that attitudes about the CAF haven't changed--that those in the military don't yet trust the CAF chain of command to handle these problems well.  So, that might depress reporting.

There was much expertise in the audience, so the questions and comments were quite good.  I didn't get a chance to ask my question as I had to go: while not all misogynists are racists or homophobes, those folks who self-identify as racists are likely to be misogynists and homophobes.  So, wouldn't getting rid of these people and sending messages that this is not to be tolerated work on multiple problems at once?  I guess what is on my mind has been stories of white supremacists in the CAF being identified but not punished and kicked out.  If that stuff is not driven out of the force, how can anyone expect progress on gender?

I did develop some sympathy with the folks on the panels doing the hard work in and around DND/CAF: that much of the effort started only in 2015.  It is unrealistic to explain cultural change quickly.  In the classic argument between my daughter and myself, the question is whether some progress should make us feel better or should we be impatient and demand more progress faster?  I guess at this point, given what is happening in the US, as long as the trend line is still positive, I can't criticize too much.  Still, the folks today all indicated that outside criticism, feedback, insights are welcome, so join in and tell me and them what the CAF and DND should be doing to make bigger, faster, more enduring improvements.

And if you want a more complete version of the conversation, check out  the live tweeting of the event on the WIIS-Canada feed.

Posted by Steve Saideman at 4:42 PM