No interviews on weekends, of course, so I had much time to tour Berlin.  Given that this is my third visit here, I had to figure out stuff I had not done before.  The answers: Pergamon Museum, Spree boat ride, Dungeon and walking in between. 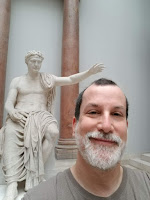 The Pergamon contains relics from Babylon and other ancient Mideast places and times.  I overheard someone talking about the British Museum dispute with Greece--it belongs in whose museum.  Not as much of a debate between this museum and Syria/Iraq as the wars in those two countries have been most dangerous to relics.  Maybe not as bad these days in Iraq, but not great.  They had a display focused on Islamic art, and part of that focused on the various parts of Syria and the status of the war in that area.  Might reduce the guilt?  Hmmm.  Always striking to see stuff that is 1000-3000 years old or so. 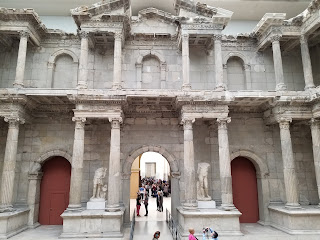 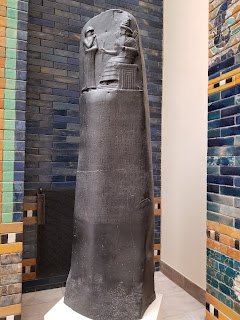 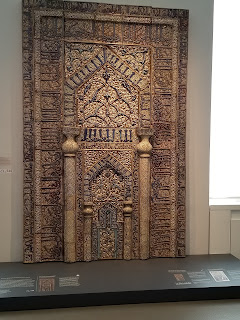 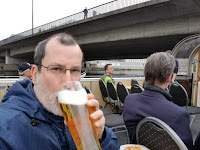 The boat guide was definitely funnier in German than in English.  Either that or we English speakers (me) were not as drunk as the German speakers? 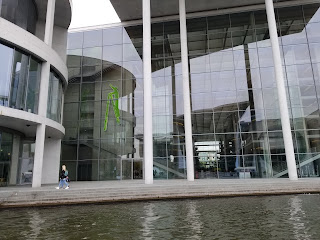 This is the outside of the Bundestag office building I was in last week.  It is too bad the reflections on the glass limit how much one can see inside--it is a very funky building. 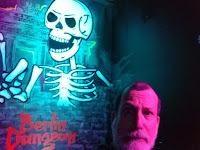 After the boat ride, I walked around, bumped into some wedding photography, which seems to happen everywhere I go.  And then I went to the Dungeon.  We could only take pics at the start, so this is all I have.  I took the English tour with many teenage girls and some random guys sprinkled in.  They were from all over (Eastern Europe, Scandanavia, Italy [I think] and Canada), taking the English tour since they understood English better than German.  It involved going from one room to another with different horrors, scary stuff and such.  In the court room, where a guy straight from the inquisition sketch (no, I wasn't expecting it) held court.  In each room, they would pick out one or two people to use in their mini-play--for the torture room, for the plague cure, etc.  Well, in this room, the judge/inquistor picked on the old maggot-eaten guy.... which had to be me.  There were no other gray hairs in sight.  The first person, a young lady, had been accused of dancing naughtily on top of Brandenburg Gate seeking to summon the devil.  I was accused of, well, killing Berlin fashion.  I pled guilty.  I mean, of course.  Well, not entirely.  He accused me of wearing pink unicorn underwear.  I contested that--my unicorn underwear is not pink.  Anyhow, after that, the rest of the group knew I was Steve from Canada since  I had to give the inquisitor
my name and home.

Not sure what I will do tomorrow, although I will do some work--I have a presentation on Monday, some interview notes to transcribe, and some grant/ethics apps (not mine) to review.  Time for me to go out and see if I can find a burgermeister/meisterburger.
Posted by Steve Saideman at 11:45 AM