Because I didn't get any interviews scheduled for today, I decided to learn from the past, rather than the present, by going to Sachsenhausen, the most significant concentration camp that is close to Berlin. See below the break for pics and some thoughts along the way:

While waiting for the bus from the train station to Sachsenhausen, I got to overhear a guide for another group discuss the roots of the Holocaust and of Nazism, talking about what is meant by being a German--who counts and who does not count as us and them.  The guide made reference to other stuff around the world including millions of Muslims in camps in China, the rise of white nationalism here and yon.  One does not need reminders of the contemporary relevance of this stuff, but he expressed it well.  The last time I visited a concentration camp was in 1987--Dachau--when Neo-Nazis were mostly a joke, when one could hardly imagine them hanging out in the White House or being amplified (retweeted) by the President.  So, yes, this was a huge dose of perspective sauce.  While I consider myself well-educated about the Holocaust, I still learned much along the way, in part because this particular camp was less focused on killing Jews and more on dealing all kinds of people selected by the Nazis for punishment--Jews, of course, but also Christian clergy, politicians, dissidents, intelligentsia, Sinti and Roma, people with disabilities, homosexuals, and more.

One of the first things I noticed is the herds and herds of student groups.  Visits to a concentration camp seem to be required for German kids.  This is part of a larger trend--Germany facing its past in ways that the Japanese do not do so much.

The second thing to notice was most strange: there was an SS camp next to the concentration camp to train camp guards in all kinds of stuff,  like how to use dogs, how to run the gas chambers, etc. What is it now? A police academy!  That kind of made me a bit sick, but the police are more than a little aware of this so note the sign they put up: 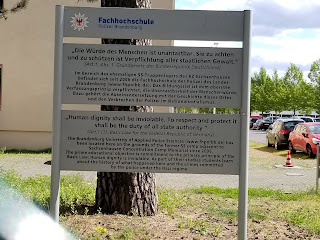 Noting the first lines of the Basic Law (the German constitution) about human dignity, the police insist that by being in the shadow of a concentration camp and being aware of the history will help the police take seriously the human dignity of the people they police.  I get that.  What I don't get is what the folks who live in the houses that were built to house the SS are thinking about the ghosts they are living with.

Sachsenhausen was built the same time as the Berlin Olympics, mostly to house political dissidents.  Indeed, the Nazis, as they competed for political office before 1933, promised to build concentration camps for those undermining German society.  They did, indeed, start such camps within months of winning their first election.  And, damn, if that didn't cause some echoes like "lock them up" and kids in cages. 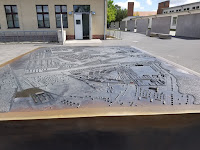 The Nazis hired an architect who thought triangles were cool, although he got fired when they eventually realized that his structures made it hard to expand:

They originally had three guardposts on each corner of the triangle with the guardpost A at the base of the triangle above the gate. While much of the site was destroyed or abandoned after after the war (more on that below) which meant not much remains of the original buildings, the gate remains: 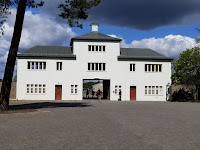 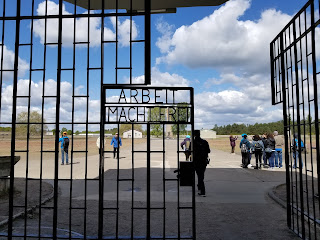 Work will make you free.   I knew of that, but I didn't know that people would whisper or the SS would threaten that the forced labor would make one free by killing them.  That one would be free once one is released from this earth.

There are very few barracks remaining with rectangles of pebbles and stones to mark where they were: 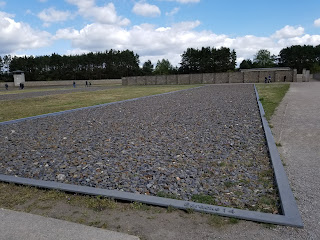 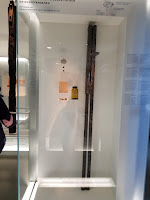 To be clear, Sachsenhausen was not a death camp--it did not have industrialized murder apparatus.  They killed mostly at small scales via forced labor, brutal conditions (open windows in winter, closed windows in summer), overcrowding (designed for 6k, reached 50k), individual murders.  As time went on, they faced pressures to kill more.  So, a key innovation that I had never heard of before was the neck shot.  Apparently, it was stressful to shoot people who know they are about to die--they yell, cry, run, scream, etc.  So, the SS innovated by creating a room where an individual would line up to have their height measured and behind the height measuring equipment, there would be space for a person in the room next door to shoot.  So, that is how they managed to kill 10,000 Soviet prisoners of war in a short period of time.  See the space between the two vertical posts in the picture to the right--that is where the shot would come from.

They eventually build a gas chamber at station Z (as in A is where you enter, Z is where you leave).  The camp was liberated by the Soviets and then turned into a camp for those the Soviets wanted to imprison.  After that, they turned it over to the East Germans who started to destroy parts of the camp, including station Z.  Protestors got this to stop, but as a result, Station Z only has the foundation left: 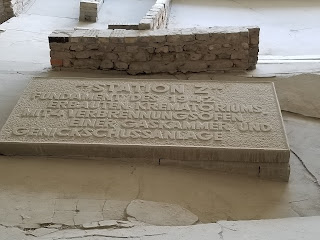 What else did I learn? 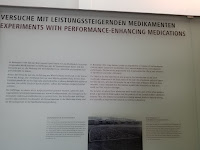 Super-soldiers this was not.  Partly coke/meth experiments for keeping soldiers, sailors and pilots awake.  Some disease stuff to see what causes stuff to spread. Most notable were the ten or so kids pulled out of Auschwitz and sent here for these experiments--they survived the camp and the war and several met up at the 50th anniversary of the liberation. 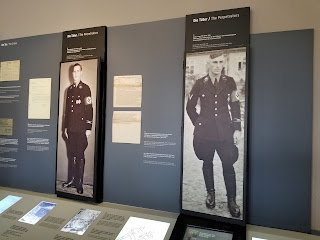 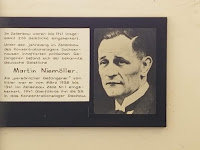 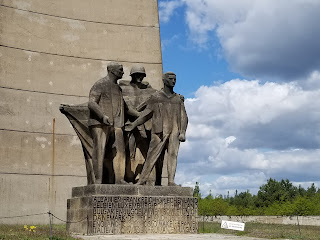 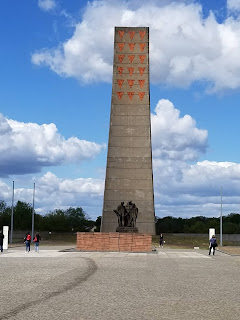 We live in dangerous times.  Maybe this stuff here won't happen again, but there are those out there who are minimizing the past in part to legitimate it and to legitimate hate against Jews, LGBTQ, non-whites, and pretty much whoever is convenient.  A reminder that it has happened before is necessary now more than in a long time.  Humans are capability of great cruelty.

Thanks for this and for your perspective. Very sobering.