Secession in Westeros: It Ain't Over

Folks have been picking on the last episode for a variety of unrealistic or unearned developments.  Here's my take on the secessionist element below the break. 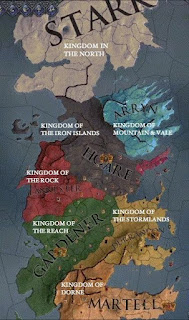 Long ago, far away, in another country before I was tenured, I wrote about secession and whether it was contagious.  There had been arguments about secession in one country leading to secession elsewhere.  I pooh-poohed (that is the professional term) that, while arguing that secession is contagious within countries--the departure of one unit with in a country changes the balance of power AND also teaches the other potential separatists not about some potential legal precedent elsewhere but about the willingness of the center to use violence to keep seceding units in.  Yes, I was trying to explain Yugoslavia's demise as well as the collapse of the Soviet Union.

So, what does this mean for Westeros and for the reign of Bran the Broken?  Well, he is aptly named--as Westeros is going to be broken a bit further.  The secession of the North is not the end of the story, but the beginning to the secessions to come.  The Iron Islands (thanks for the reminder Dr. Farley) has always been quite independent, they have had much rivalry/conflict with the North, and the new ruler of Westeros came to power because the II's preferred leader got just a wee bit stabbed by the former King in the North.  .  With Bran tolerating the departure of the North, the II folks will push to secede, and Bran is likely to go along as the II folks are super annoying anyway.  They don't share a common religion (what is dead may never die versus the old gods of the north and the new of the south), so letting them go will make it easier to develop education policy.  So, instead of Six Kingdoms plus the North, we get Five Kingdoms plus the North and the Iron Islands.

But wait, Dorne has always been pretty independent minded as well, and being on the periphery of the Kingdom makes it easier to secede.  Having a new King who is mostly unknown means that he will have to rely even more on nationalism than the average king.  The Six Kingdoms have never had deep ties to Dorne, so Bran is likely also to let Dorne go.  Wine can always be imported.  So, I would expect Dorne to be the next Kingdom to become independent.  Leaving Westeros with four Kingdoms.

Is that the end of the secessionist cascade?  High Garden is unlikely to secede or be allowed to do so.  Its Lord is included in the key governance structure and has much power over the economy both via Bronn's position as the Lord of Coin and the breadbasket of the Five Kingdom's.  As said breadbasket, it would not get an easy escape as it is integral to the Kingdom's economy.

The Vale?  Always quite autonomous, its future depends on two factors: whether Bran disrupts the status quo and reduces the Vale's control over itself AND what happens with Lord Robin.  The first is easier to figure out than the second.  Bran has no incentive to break the existing arrangement, plus as a reader of the APSR, Bran knows that mountain people are difficult to govern (see Fearon and Laitin).  Given that Robin is pretty easy to distract and the Knights of the Vale have taken on big losses thanks to its key roles in the Battle of the Bastards, the Battle of Winterfell, and the Sack of King's Landing, they are probably happy with the status quo.

The remaining pieces of the Kingdom have less incentive to leave and less capability to do so.

So, I expect Bran the Broken to rule over the Four Kingdoms justly and peacefully as long as the Dothraki are sent back home.  Refugee returns can create conflict, of course, but that is Essos's problem.

Posted by Steve Saideman at 9:18 AM

Email ThisBlogThis!Share to TwitterShare to FacebookShare to Pinterest
Labels: game of thrones, secession

The Dothraki will be slaughtered, as convenience and occasion permit.

In the new Westeros, Sansa has de facto rule of the Vale and the Riverlands because of the astonishing incompetence of their rulers, both of whom are her relatives. In addition to Samwell Tarly, basically an old family retainer/client casting the Reach's vote at the decisive moment, and her personal bodyguard Brienne doing the same, even Gendry Baratheon was a Stark employee in the smithy and a suitor for Arya. There is something wrong her brother, who officially holds the title. There is no reason whatsoever to think this new monarchy won't be correctly perceived as a sloppy arrangement where the North exercises decisive power over the rest of the continent without taking any responsibility to provide any services whatsoever, including, or especially, peace.

And in the long run, the way that a single negative vote can derail an election means the elective monarchy is much, much more like Poland before its disappearance from the map.

There will be no peace.But the show thinks this is a happy ending because revolution is slaughtered.

Note that Dread Pirate Araya is headed west. Who knows what civilization lies that way and how it will interact with the known kingdoms?

5 kingdoms not four. The Vale, The Riverlands, The Reach, The Stormlands, and the Lannister lands makes 5. And who controls the Lannister Kingdom? Tyrion?