The Most Well Known Battle Still Surprises: Some Stuff I Learned At Normandy

Yesterday, I went to Normandy, as I had some time before the EISS conference in Paris, and I hadn't seen much of the battlefields when I visited as an undergrad with a limited budget.  I had only seen one of the British beaches and its famous Mulberry artificial breakwater/port the last time.  This time, I joined a tour that started with a bus from Paris which went on to Caen, a pivotal target that took far longer to take, to Point Du Hoc, Omaha Beach, the US cemetery near Omaha, and then Juno Beach where the Canadians landed.

On the ride there (three hours), one of the tour guides (we had two) gave a long, basic download of the leadup to the war and then of the war itself up to D-Day.  It was most struck by her forthrightness about how divided France was between resisters and collaborators.

The Caen Memorial had two striking parts plus some other interesting aspects.  There was a great film that had a split screen with one side having the allies' perspective and the German perspective on the other.  It showed both sides preparing, alerting, fighting, and then one side winning and the other side losing.  The German side was actually a bit of a mix because it also showed the resistance setting up explosives and successfully derailing a train. 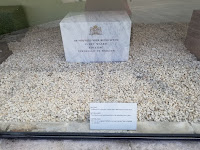 The second striking aspect was a set of stones outside laid by a number of countries from the usual suspects of US, Canada, UK, Poland to those who had been liberated: Netherlands and Norway.  The Soviet Union laid one stone, characteristically taking most of the credit (and mostly deservedly so) for defeating Germany).  Strange to see?  Greece.  Um, sure.  And interesting to see: East and West Germany.  Each block had a different message which really reflected the very different cultures/approaches of the countries.  Some pics: 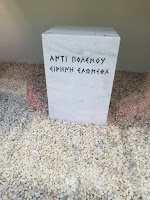 We had lunch there--an awkward one since we sat across from complete strangers with some families in between.  I watched some college student wolf down 5 cups of espresso.  Oh my.  The gift store had some nice stuff, but I could not help but notice the dominance of the 101st Airborne Division.  This was probably true before Band of Brothers and is certainly true now.  The 82nd does not get as much attention, the Big Red One (the 1st infantry gets much), and the 29th Infantry gets relatively little.  As a quick tour of the cemetery (see below) indicates, lots of other units paid a big price at or near Omaha.  The funny thing is the book I picked up to compensate for so much attention for the  Band of Brothers was ... about the next battalion in the same regiment of the 101st.  Oops.

We then went to Point Du Hoc, which has gotten much play over time, and deservedly so as nearly 300 US Rangers climbed up a sheer cliff in the face of machine gun fire and other weapons.  They took tremendous casualties getting to the top so that they could take out a major artillery piece that could reek havok on both Utah and Omaha beaches.  Except.... the guns weren't there.  I will be Peeving (my next Peeve segment on the BattleRhythm podcast will address this) about heroism combined with not completing the objective.   Indeed, I learned today at the conference that the leader of this mission was not promoted but sent home, never to lead another operation.  Which might be a hint.

To be clear, I don't mean to diminish what the Rangers did.  It is just a big part of war that soldiers, marines, sailors, and aviators end up doing stuff that is amazing, but are frustrated by bad intel, poor leadership, luck, and, yes, the adversary being smart. 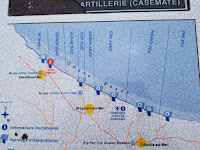 We then went to Omaha Beach.  The bluffs above clearly provided the defenders with a huge advantage.  A lot went wrong on and near that beach that day.  Omaha gets more attention because it was the bloodiest beach, the toughest mission, the closest call.  It was moving to be at that place where so many got killed in the first wave, that the waves kept coming, that the soldiers eventually picked themselves up and broke out. 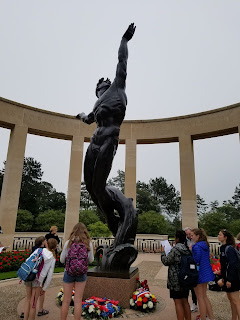 And then, appropriately, we went to the US Military Cemetery where those who died in the first few months of the campaign (and some, pilots who got shot down, who died before D-Day).  These places are always beautiful, incredibly well laid out, well tended, and just wrenching with so many boys (most of the dead were privates or private first class--which means young, mostly) dying before they could really live their lives.  Not all were army as there were navy and army air force folks also buried here.  Most of the people here died after D-Day--the campaign to break out of Normandy was very difficult.  The hedges of the area proved to be very helpful for the German defenses.

I also could not help but feel my identity.  I don't see myself as Jewish in terms of religion, but I could not help but pay more attention to the Jewish stars among all of the crosses.  More Jews may have died at Normandy, but most Jews end up getting buried in Jewish Cemetaries.  Still, there were enough to make it clear that Jewish Americans paid a price as well.  It also made me angry--that all these folks died to defeat Nazism and yet there are Americans now who buy into Nazi ideology.  Not sure how they can call themselves Americans.  They are, as they were, the enemy. 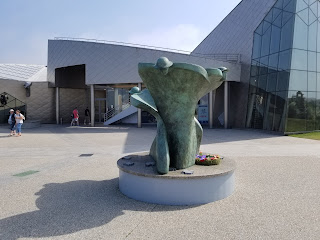 After the cemetery, we drove along Gold, the British beach, to get to Juno.  It was not so impressive--the museum and the various signage was not so extensive.  The Canadian beach was the second toughest, with lots of defenses built into the sand.  The sand itself seemed to be a weapon as it was driven into our faces by tough winds, the second time I nearly lost my hat and sunglasses (Point Du Hoc was the first).  I did feel my Canadian identity here--that Canada, yes, punched above its weight and played a key role.  Their museum's swag was not great, however.

Then we had three hours to get back to Paris.  Very much a worthwhile trip.

I learned a lot, was moved quite a bit, and checked off a key item on my list of places to visit.  I do love my job for many reasons, including giving me the opportunity to pursue my curiosity wherever it goes.  This applies both to my work and the stuff I can do that is work-adjacent.