I am currently bag-less in Budapest.  Due to a delay in Ottawa for several hours, I made my connection in Newark by just a few minutes, which meant that my bag got to stay in the NYC area for the night.  I am in Budapest for the first time since doing research for the Xeno book for a workshop and presentation.  The workshop is how transnational actors affect civil wars--a topic dear to my heart since 1991.  The presentation is on NATO's smart defense effort--to coordinate the procurement of weapons to facilitate cuts without gutting NATO's capabilities.  I am a skeptic, given what I have learned from NATO's performance in Afghanistan and over Libya.

Anyhow, what did I learn on the way to Budapest?
First, some planes are funky--with stairs to a suite of bathrooms in a deck below the passengers: 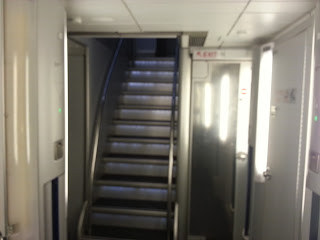 I saw a couple hanging out in this space but not sure they were trying to qualify for that special club or not.  The restrooms were larger than those in most planes I have experienced, so .... um, yeah.

Second, the most recent Die Hard movie was really quite bad with an awful, awful, awful plot.  Jack the Giant Slayer, on the other hand, was underrated and delightful.  A box office bust apparently but still a heap of fun.

Third, I really don't mind that much losing the baggage--what I mind is having to spend an extra 30 minutes in the airport doing the paperwork and waiting for it to be processed.  That is, as long as it shows up when promised tomorrow morning.  Does remind me of my bag arriving around midnight for my first successful job talk....

Fourth, I learned not to go to dinner with a certain friend--he has very, very expensive tastes.  I would have provided some cheap goulash.... but the company and beer were good.
Posted by Steve Saideman at 6:03 PM