American as an Insult 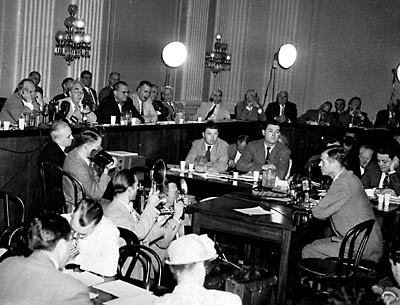 Elizabeth May may be proving why her Green party has such limited support in Canada.  If the best insult she can have for Stephen Harper is ... that he is not Canadian but essentially an American, then she really has little of value to say.  To call someone un-Canadian is just about as stupid and reckless as calling someone un-American.  Does Elizabeth May really want to be in the same club as those who sat on the House Un-American Activities Committee?

It makes May sound much more like those in the GOP who question Obama's citizenship.  Sure, she may not really mean it, but it is cheap, low politics.  One can criticize Harper on many grounds (and I have), but to say he is not Canadian means what exactly?  That he is too American?  Why is that an insult?

All it does is distract from the real criticisms people can levy at Harper--that his government has over-reached, that it is incompetent, that its promises to be transparent can only be viewed as comedy/farce, and so on.  But if you want to call the folks who voted for Harper traitors to all that which is Canadian, then you may find Harper getting the necessary plurality of votes again in 2015.

I don't even think the insult of being called "un-Canadian" or "American" is meant to be construed as "traitor" a la Joseph McCarthy. That sort of rhetorical aggression, ironically, would be "too American".

It's something even more banal and frustratingly provincial. It's like calling someone a "yuppie" or an "east coast elite".

It is - and I'm a Canadian - an absolutely ridiculous insult that is very deeply ingrained in Canadian society. And the reason it still gets used is because it works. Even subconsciously. Even on run of the mill, centrist liberal Canadians (just ask my mother...)

It drives me crazy. Just look at the first and arguably most effective assault by Harper on Ignatieff after he was named Liberal leader. His time in Europe and *gasp* Harvard was used against him in the same vein as May's "insult" to Harper. Great success abroad in one's field is a threat to lots of Canadian's with an inferiority complex.

It REALLY drives me nuts.

If I'm not mistaken, May is a dual American/Canadian citizen.

And? She is still clearly playing to the worst instincts of people. Again, I am not a fan of Harper, but he does have a constituency in Canada. He is not an implant from the US but a product of Canadian politics. Folks may not like it, but there it is. Cover it in one of my favorite flavors if you want (http://saideman.blogspot.ca/2011/06/ignorance-sauce-now-in-americanized.html) ...

You may note that she followed up her "un-Canadian" comment, noting that Harper's "...political identity was forged with young Republican camps south of the border in the U.S....". Was this a broad brush anti-American statement or an observation that his political identity was influenced by a Republican conservative ideology that was further right than the Progressive Conservatives of Canada at the time?

May didn't say "American" and she qualified her "not-Canadian" statement, whereas Harper's European statements were more of a code-word for socialism, high taxes, etc., and pandered to his constituency, reinforcing their support.

Is American used in a pejorative way here? Of course, like Harper's use of European, this is a code word for "big, brash and a tad to the right of us" (and a few other things).

To understand why "American" can be such a potent pejorative, and has some staying power, one has too look at relations before '45, understand the real and perceived threats, consider how the asymmetrical relationship has shaped culture (both political and societal) north of the border, and the effects of this right up into the present.

As an aside, I was amazed when my American students (I do Cdn For Pol down in the US), described Canada's decisions not to go to Vietnam, abandon nukes and not go to Iraq as being anti-American, as opposed to a sovereign state following its own For Pol for reasons of its own national interests. It was very much an "if you are not with us, you are against us" mentality.

I wasn't defending May with my comment, more just observing one problem with the rhetoric that she's using.