My parents were in Ottawa, so I took my wife, daughter and my folks to the Canadian War Museum--partly to get the Canadian perspective on the War of 1812.  The current government played up that war as a big source of Canadian nationalism, even though Canada didn't really exist until 1867.  And many of the Canadians I have talked to tended not to see that war the way the Harper government see it. 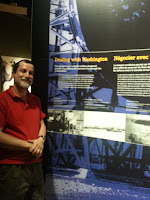 Anyhow, it is always fun to see history from different perspectives (I am going to Hungary's House of Terror tomorrow--perhaps the most politicized museum of its kind--more on that later).  Like, this exhibit in the Cold War has a header of: Dealing with Washington!  As if the U.S. can be a difficult neighbor!?!  The stuff here relates mostly to NORAD--where the US and Canada share responsibility for defending the North American airspace.

The museum spends heaps of time on the establishment of Canada, with perhaps a bit overly sunny view of relations with the First Nations; War of 1812; other crises in the lead up to Confederation; the Boer War (the real starting point of the grand tradition of being led poorly by British generals), World War I and II, Cold War, and peacekeeping.  Thus far, Afghanistan is only reflected in a series of pictures taken by one war photographer.  Great shots, but they need to make some space for the most important Canadian international effort since Korea. 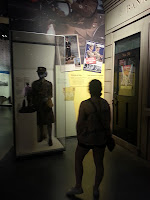 On the bright side, my daughter and I got to heft an AK-47.  Heavier than I thought.  And it was fun going through the museum with her, as she paid more attention to the role of women in Canada's military history.

Definitely worth a few hours, even if you are not a big fan of tanks.  If you are, then you are in luck as the lower floor has a heap of tanks.
Posted by Steve Saideman at 5:41 PM